Age is just a number — ‘You don’t become someone else when you’re older, you’re still you’ 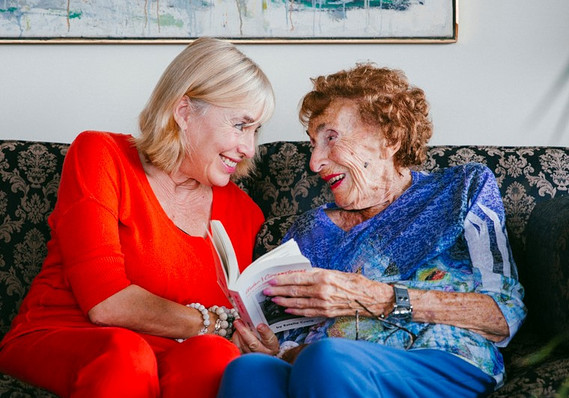 Robin Baker Leacock’s mother was a “dynamic, charismatic” woman, the documentary filmmaker said. She wrote five books after her 100th birthday, for example.

It was during visits at her mother’s senior residence that Baker Leacock realized the residents deserved their own documentary, to explore the concept of aging and exhibit the real normal for these Americans. The documentary highlights seniors ages 75 to 105, and their thoughts on getting older.

“I spent so much time there, and met so many extraordinary people there who were fun and lively and just incredible,” she said. Baker Leacock, who had already created four other documentaries, started recording her mother and colleagues. “Everyone was so well-spoken and had a whole lot to say about the subject of aging,” she said.

Age is but a number, and what matters most is how young a person feels, the documentary shows. But age discrimination is rampant in the workforce, and even outside of it, people may unintentionally be hindering older Americans’ capabilities. Family and friends sometimes try to help older loved ones accomplish tasks, or finish their sentences, but refraining from doing so can be most helpful. Allowing those people to do it themselves, if even a bit slower, helps them retain their agency, said Louise Aronson, author of “Elderhood: Redefining Aging, Transforming Medicine, Reimagining Life.” “We are all a little guilty of this,” she told MarketWatch in an earlier conversation. “Everyone thinks anyone old is senile.”

See: How do people envision their last days on Earth? The answers may surprise you

Baker Leacock’s documentary, called “Stella & Co: A Romantic Musical Comedy Documentary About Aging,” dispels those myths, and showcases residents dancing, laughing and having a good time with one another. Her mother, Stella, died last year at 103.

The 50-minute film, which is a sequel to Baker Leacock’s other documentary “Stella is 95,” will continue to air on PBS throughout May and June. The filmmaker spoke with MarketWatch about her documentary, its characters and how older Americans view aging.

MarketWatch: What is the messaging about aging? What does it mean?

Robin Baker Leacock: Every culture basically venerates older people, particularly indigenous and Asian cultures. They tend to look upon older people as precious, and for some reason we don’t do that. We just put them aside unless they’re a beloved grandmother or grandfather in the family. My mother used to say people think it’s amazing if I can speak and walk and talk and just be a normal person. You don’t become someone else when you’re older, you’re still you, so I wanted to give a voice to the seniors. They should be our leaders.

MarketWatch: What are some misconceptions about aging?

Baker Leacock: That people become something else. Obviously there are times if you are in a situation where you have dementia or where you have some other physical characteristics that make you unable to be the dynamic person you might have been, but you are still you. People who are fortunate enough to be sharp and smart when they’re older have a lot to offer the world and themselves. I think just as one might have a preconception of a particular race or gender and treat them in a different way, the same is true of an older person. It’s a stereotype.

MarketWatch: How do people in the documentary feel about aging?

Baker Leacock: Pretty much all of them said they felt as they did at 30 or a teenager. None of them felt old, they all felt themselves, and they all wanted to stay active. They’re not a different species, they’re just people who have been here longer.

MarketWatch: What have you learned about the aging process after doing this documentary?

Baker Leacock: What I’ve been saying — they’re really interesting people who are older and compelling and have their stories and their lives and their plans. They want to be a part of the world as much as they can.

MarketWatch: Is there a memory of your mother you look back on fondly, that exemplifies this concept of aging?

Baker Leacock: There was a lot of singing and dancing and a lot of having fun. My mom used to say, seize the moment — carpe diem. One of her favorite things to say was, yesterday is history, tomorrow is a mystery, and today is a present. I think the most successful people were seizing the moment, feeling alive, keeping busy and keeping active. The more engaged you stay, the longer and more fulfilling of a life you’ll have.

Also see: You’ll never live to be 150 and other things to know about aging in America

MarketWatch: Is there anything else you think is important to share about the subject of aging?

Baker Leacock: Aging will more so be a big business as we get older. Baby boomers are starting to get into older age, and things around aging will become cooler and hipper. Dodging aging might start to wear off as we all get older. For instance, senior residences might be created in a more fashionable way. It will become a bigger and bigger business because a huge portion of the population is getting older. Older people have a much younger attitude than perhaps they had in the past. No matter what age, people are actively wanting to stay a part of the world.

PrevPreviousMetals Stocks: Gold prices edge higher as traders track weaker dollar
NextAirlines are issuing billions of dollars in vouchers — but can you still get a cash refund for coronavirus-related flight cancellations?Next