Associated Press: McConnell under pressure from within GOP ranks as well as from Democrats in drafting coronavirus relief legislation 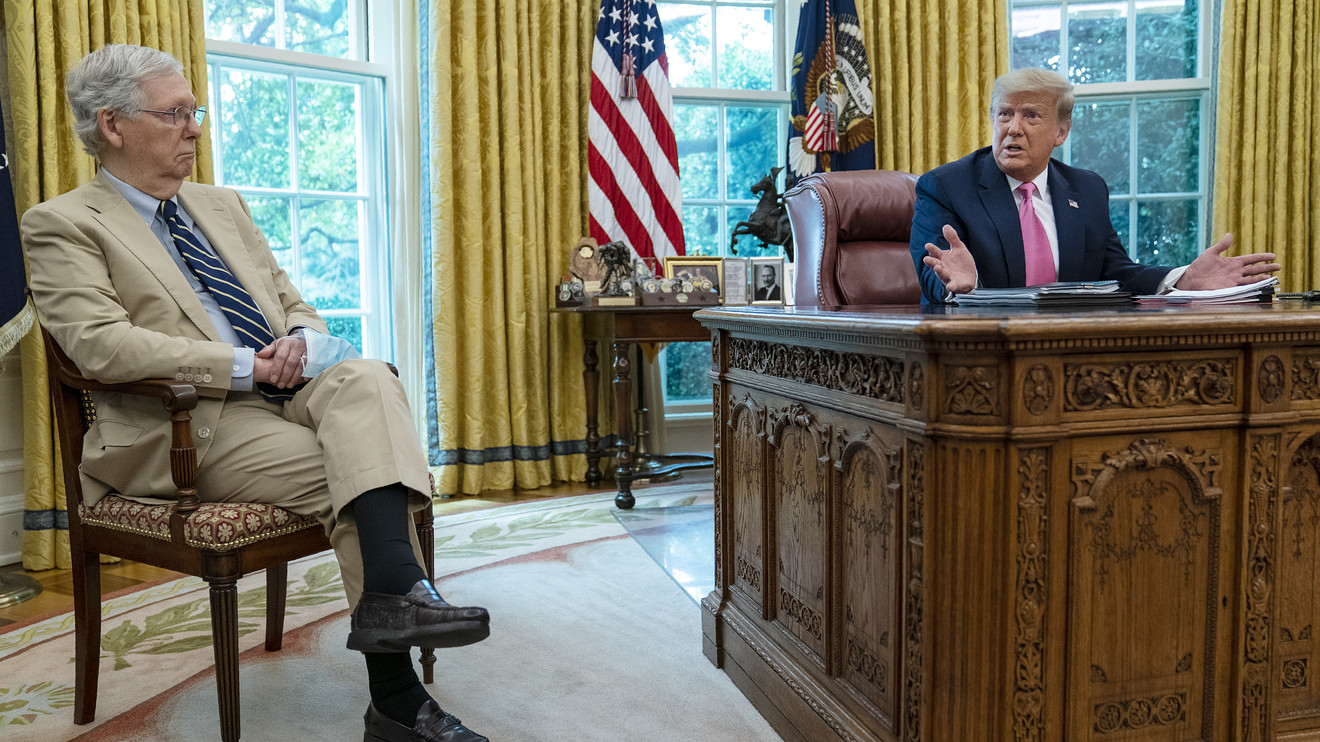 Key GOP senators revolted over the emerging effort as the price tag could quickly swell above $1 trillion. Conservative Republicans vowed to slow walk passage of any bill. But pressure is mounting as the virus crisis deepens and a $600 weekly unemployment boost and housing relief comes to an end Friday.

“We’re hopeful we’ll be able to get there,” McConnell told reporters.

But some Republicans are resisting more big-ticket spending. “I just don’t see the need for it,” Sen. Ron Johnson of Wisconsin told reporters Wednesday.

“We’re still on the 20-yard line?” Senate Democrat leader Chuck Schumer said, referring to White House comments. “Where have the Republicans been?”

McConnell’s blueprint is expected to include new round of direct payments to earners below a certain income level, similar to the $1,200 checks sent in the spring. It also will likely have some version of Trump’s demand for payroll tax holiday for workers, which many Republicans oppose.

Republicans want to include at least $105 billion for education, with $70 billion to help K-12 schools reopen, $30 billion for colleges and $5 billion for governors to allocate. The Trump administration wanted school money linked to reopenings, but in McConnell’s package the money for K-12 would be split 50-50 between those that have in-person learning and those that don’t.

Republicans said they want to replace the $600 weekly federal jobless benefit with a lower amount, to prevent the unemployed from receiving more aid than they would through a normal paycheck.

“ The centerpiece of the GOP package will be McConnell’s five-year liability shield to protect businesses, schools and others from COVID-related lawsuits. ”

Sen. Marco Rubio, a Florida Republican, said there will be another boost for the small business Payroll Protection Program. “It’s going to be big,” he said.

The centerpiece of the GOP package will be McConnell’s five-year liability shield to protect businesses, schools and others from COVID-related lawsuits. It’s also likely to include tax breaks to help shops and workplaces retool safely for the reopenings.

With the nation’s pandemic death toll topping 142,000, the outbreak is delaying schools from opening in fall, forcing states to clampdown with new stay-home orders and sending a chilling ripple through an economy teetering with high unemployment and business uncertainty.

On Tuesday, Mnuchin and Meadows made it clear the White House was resisting the Democratic proposals for new spending on virus testing, housing aid or money for cash-strapped states, according to a person granted anonymity to discuss the private talks.

Easing the payroll tax is dividing Trump’s party because it does little to help out-of-work Americans and adds to the debt load. The tax is already being deferred for employers under the previous virus relief package. Supporters say cutting it now for employees would put money in people’s pockets and stimulate the economy.

Republicans say $150 billion allotted previously to state governments is sufficient to avert sweeping layoffs and they said more housing protections are not needed to stem what advocates warn will be an eviction crisis.

A private lunch session Tuesday with the White House officials grew heated as key Republican senators complained about big spending. Supporters of the package “should be ashamed of themselves,” Sen. Rand Paul of Kentucky said as he emerged.

Sen. Ted Cruz of Texas warned his colleagues that if the economy is still shut down come November, Joe Biden will win the White House, Democrats will control the Senate, and “we’ll be meeting in a much smaller lunch room,” according to a person granted anonymity to discuss the closed-door session.

Sen. Rick Scott of Florida said it’s wrong to “bail out” cash-strapped states. “Florida taxpayers are not going to pay for New York’s expenses,” he said.

At the start of the outbreak, Congress approved a massive $2.2 trillion aid package in March, the biggest of its kind in U.S. history. McConnell at the time said he wanted to “pause” new spending. Pelosi took a different approach, pressing ahead to pass her $3 trillion bill in May.

Democrats are calling for $430 billion to reopen schools, bigger unemployment benefits and direct aid checks, and a sweeping $1 trillion for state and local governments. It includes a fresh round of mortgage and rental assistance, new federal health and safety requirements for workers.