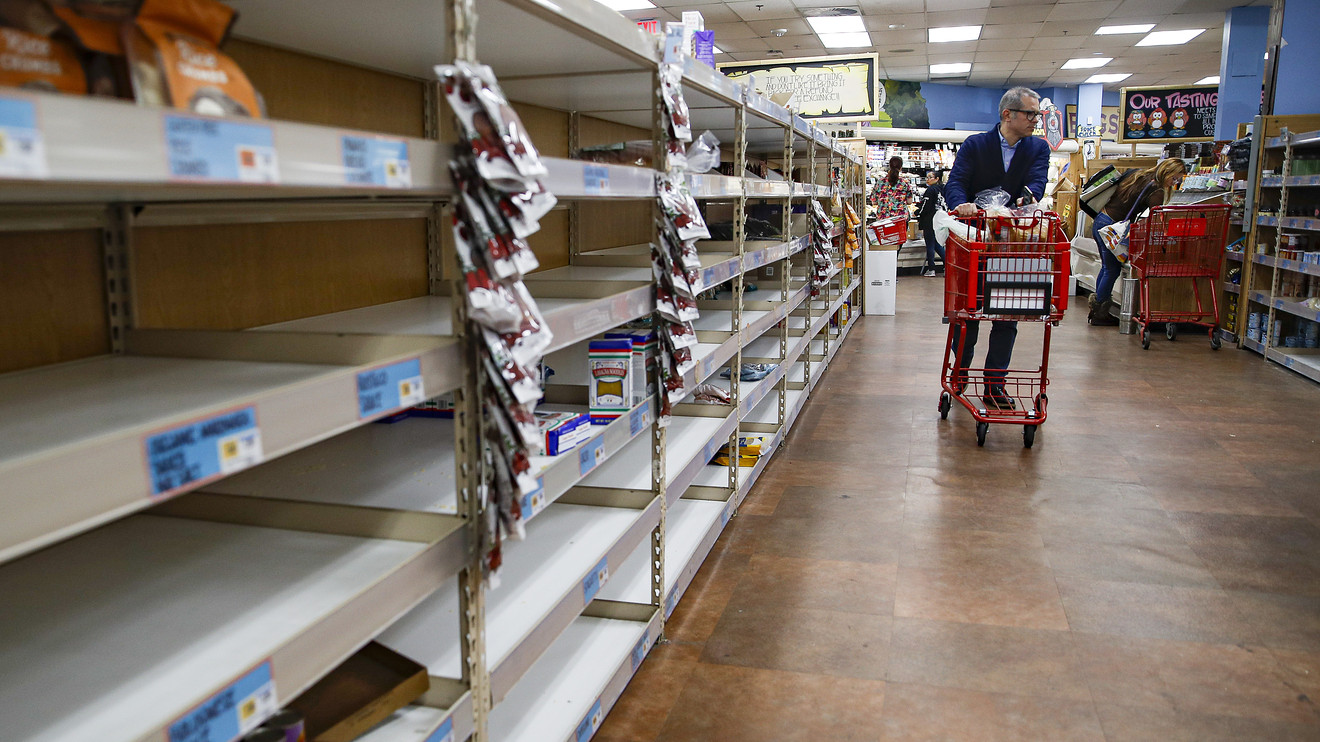 Hutchings, a bartender and performer, had lined up gigs in advance of the South by Southwest film, music and technology festival, which draws hundreds of thousands of visitors to Austin each year. She’d expected to earn about $3,000 — enough to pay her taxes and buy a new sewing machine for a tailoring business she runs.

Relaxed, she sat down to watch a movie. Then her phone started vibrating. Cancellations rolled in. One by one, the jobs she’s been counting on were gone. In the face of the spreading coronavirus outbreak, Austin officials had called off the festival just as the first attendees had begun to arrive.

“In 15 minutes, things fell apart,” Hutchings said. “To watch it vanish, all at once, was shocking.”

As Hutchings and hundreds of millions of Americans can attest, damage from the coronavirus has pummeled the U.S. economy with breathtaking speed and force. Hour by hour, day by day, the activities that households take part in and spend money on — plane trips, sporting events, movies, concerts, restaurant meals, shopping trips for clothes, furniture, appliances — are grinding to a halt.

Just a month ago, experts had expected any severe economic pain from the outbreak to be confined mainly to Asia and Europe. The U.S. economy, enjoying a record-breaking 11-year-long expansion, would likely keep cruising, it was thought — a bit bruised but not seriously damaged.

“The expansion is under threat,” said Philipp Carlsson-Szlezak, chief economist at the Boston Consulting Group. “There’s a very plausible risk this will amount to a recession.’’

On Wednesday, Wells Fargo Securities had predicted a slight drop in the nation’s gross domestic product — the broadest measure of economic output — in the April-June quarter. The next day, as the American stock market endured its deepest plunge since 1987, Wells Fargo economist Jay Bryson wrote that it was “painfully obvious that we need to rethink this forecast’’ and further downgrade the outlook.

How did the picture darken so sharply, so quickly?

The speed of the virus’ spread appeared to surprise economists as it hopscotched to 117 countries, including the United States, infecting a documented total of roughly 150,000 people worldwide and killing more than 5,500. And what health experts agree was the U.S. government’s fumbling early response to the crisis has undermined the confidence of consumers, investors and businesses. Anxieties have escalated.

U.S. officials are bracing for a dramatic acceleration of cases — beyond the roughly 2,200 that have been documented so far in 49 states, Washington, D.C., and Puerto Rico.

For most people, the coronavirus causes only mild or moderate symptoms, like fever and cough. For some, especially older adults and people with existing health problems, it can cause more severe illness, including pneumonia. The vast majority of people recover. According to the World Health Organization, people with mild illness recover in about two weeks, while those with more severe illness may take three to six weeks to recover.

Yet as the gravity of the crisis had seeped into public consciousness, suddenly everyone is shrinking from public gatherings of any real size for fear of contracting the virus, and organizers can’t call off events fast enough.

The NBA and the NHL suspended the rest of their seasons. The NCAA dropped its wildly popular March Madness basketball tournament. Broadway is closed. St. Patrick’s Day parades are scrubbed. Hunkered down at home, Americans are leaving restaurants empty, hotels vacant and jetliners unoccupied.

The danger to the U.S. economy stems from a fundamental reality: Consumers drive roughly 70 percent of growth. When spending halts, the economy can’t grow. And while online shopping will likely surge as people sequester themselves at home, such purchases still account for just a small fraction of overall consumer spending.

“The economy is doomed to recession if the country stops working and takes the next 30 days off,’’ Chris Rupkey, chief economist at MUFG Union Bank, wrote in a research note this week.

Compounding the threat, the very measures that are required to contain the outbreak — quarantines, reduced travel, an avoidance of crowds and gatherings — are sure to stifle economic activity.

The resulting slowdown across the globe has undercut the price of oil, intensifying pressure on energy producers and likely reducing business investment. And many U.S. companies, especially in the airline and energy industries, are heavily indebted and might have to respond to financial pressures by cutting expenses — including jobs.

Despite rebounding Friday on President Donald Trump’s declaration of a national emergency to try to help stem the health crisis, the stock market remains in a bear market — the Dow Jones Industrial Average has shed nearly 22% in just a month — which stands to further dim the confidence of consumers. Investors whose stock market wealth shrinks typically become less likely to spend much.

“You can take to the bank that we’re going to have negative growth in the second quarter,’’ said Nathan Sheets, chief economist at PGIM Fixed Income.

Recessions are defined informally as two consecutive quarters of economic contraction. It isn’t yet clear whether the coronavirus inflicted enough economic damage from January to March to turn GDP negative for the quarter or how deeply the harm will spread into the April-June quarter.

“It’s pretty close now to a 50-50 proposition as to whether we see two quarters of negative growth,” Sheets said. “Even if that condition is not technically satisfied, it’s going to feel pretty bad. It’s going to feel recessionary.’’

Officially, the U.S. unemployment rate remains just 3.5%, a half century low. During the Great Recession of 2007-2009, companies responded to a deteriorating economy by aggressively slashing jobs. This time, Sheets suspects that most of them will hold off on layoffs in hopes that the virus and its economic damage will subside in just a few months. If, however, many companies across the country were to cut jobs, the blow to the economy would worsen. In addition, the slowdowns in Asia and Europe, which are closely intertwined with the U.S. economy, are sure to weaken growth in the United States.

Intervention by the Federal Reserve, by slashing interest rates, and Congress, by moving toward approving financial aid to people affected by the crisis, could help mitigate the economic hardship. So would a relatively swift containment of the virus.

For now, though, the uncertainty is distressing businesses across the country. When Austin’s South by Southwest gathering was canceled, Brent Underwood’s 20-bed hostel lost about 20% of its annual income.

Normally, the hostel also receives bookings from people attending events at the University of Texas, and in the fall, from the annual Austin City Limits music festival. Underwood fears his income will suffer further if the university’s graduation and the festival are canceled. He would like to cut expenses. But most of his costs are fixed, including a property tax bill due this month.

Andy Cooley has already had to cut the hours of three of the six workers at his printing company, Central Press in Millbrook, New York, because the foundations, hospitals and schools that are some of his major customers are canceling events. He’s lost orders for printing invitations and programs.

“Earlier today, I received a call cancelling all printing related to a fundraiser happening in May,” Cooley said. “I understand they have to do what they have to do, but the ripple effect is exactly that — we all feel the effect.”

Economists say the U.S. economy has never faced a moment quite like this one. The 9/11 terrorist attacks 19 years ago, devastating as it was, caused only a short-lived downturn. And it presented consumers with starkly different challenge:

“Then the patriotic thing was go out and spend,’’ said Louise Sheiner, policy director for the Brookings Institution’s center on fiscal and monetary policy and a former Federal Reserve economist. “Now, the patriotic thing to do is not go out… It’s like something we’ve never seen.’’

“You’ve got to eat,’’ Grech said. “Keep these guys alive because my fear is, if they close, they may not reopen.’’

See also: Where does the stock market go from here after the worst drop since 1987?

PrevPreviousRetirement Weekly: News and analysis for those planning for or living in retirement
NextKey Words: Tennessee man sitting on almost 18,000 bottles of hand sanitizer says he’s doing ‘a public service’Next