Autotrader: Some are calling for a revival of the 2009 Cash for Clunkers program that paid up to $4,500 for old cars 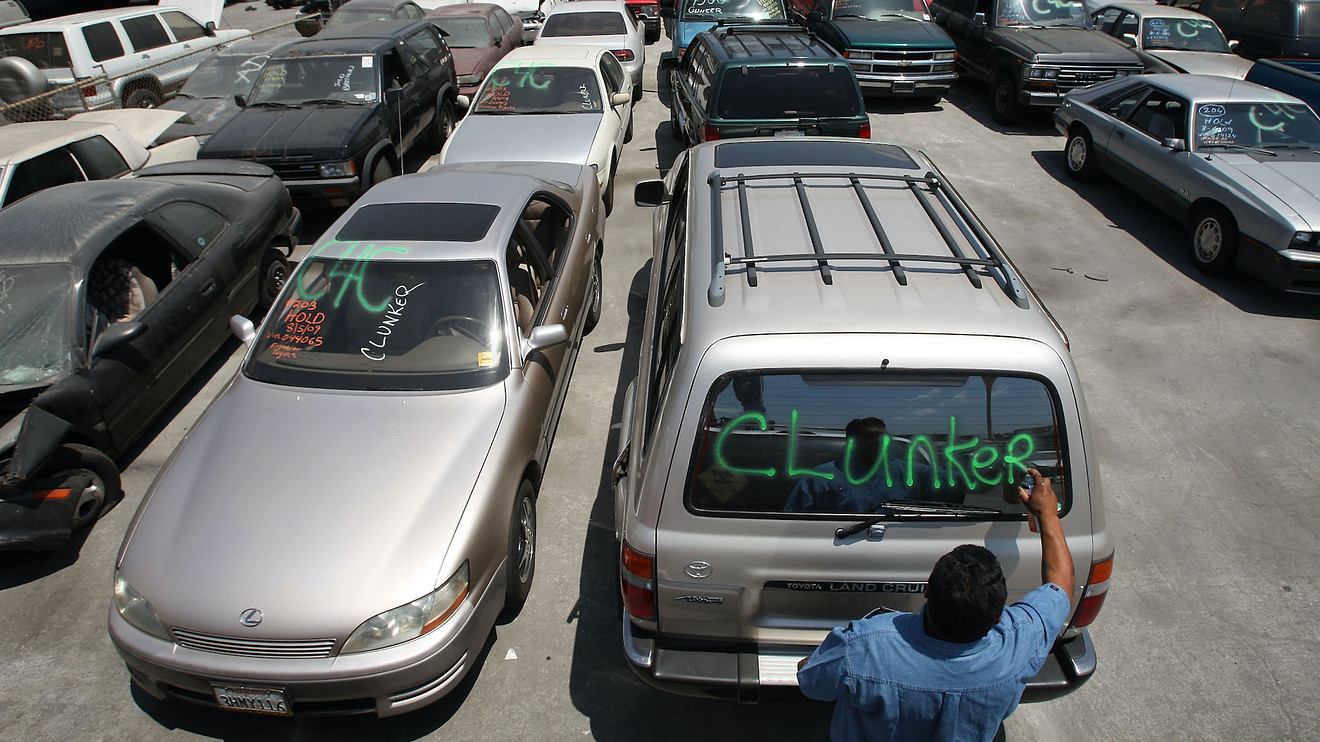 As new vehicle sales plummet, is it time again for Cash for Clunkers? The prospect of such a program to jump-start retail sales with government incentives moves to the front burner in some quarters. Just over a decade ago, the federal government gave cash vouchers to owners with old cars if they’d scrap them in favor of a new vehicle.

Was Cash for Clunkers successful?

Back when the program made its debut on July 1, 2009, it was very popular and ran out of its initial $1 billion stake in just over a month. An additional $2 billion was authorized to keep it afloat until November. At the time, Autotrader observed that the program helped drive July’s shopper traffic on the site to over 15 million visitors.

It’s easy to see why the program was so popular. Participants could get $3,500 to $4,500 for their old vehicles, no matter the condition, as long as they were less than 25 years old with up-to-date registration. Cash for Clunkers sought to scrap older, less fuel-efficient cars and trucks in favor of new ones with better fuel economy and safety equipment.

Some estimate that Cars for Clunkers was responsible for removing more than 700,000 old cars and trucks from the road. Industry data suggests that removing so many vehicles led to an increase in used vehicle prices. Critics believe that scrapping otherwise running vehicles deprived the poor from access to safe, affordable, personal transportation.

How would a new Cash for Clunkers program work?

An industry voice calling for a new Cash for Clunkers program is Adam Jonas, an auto analyst for Morgan Stanley. MS, -2.61% He believes in several proposals, including a $5,000 government coupon to scrap a car. The payment may predicate on the vehicle having as much as 60% domestic content, costing less than $60,000 and a household income cap for recipients.

As before, the Cash for Clunker program is said to have benefits in removing old, fuel-inefficient cars and trucks off the road. In addition to getting better fuel economy, the new cars would also produce fewer emissions and offer the latest in safety equipment.

Why is Cash for Clunkers needed now?

Retail sales dropped precipitously during March, a trend that continued in April because of the inability of dealers to conduct retail sales. Only recently have new vehicle sales been reclassified as an essential service. Sales are continuing through innovative online programs that allow for virtual shopping and at-home deal completion through tools like Autotrader’s Dealer Home Services. Even as the economy reopens, there are signs that the downturn could continue as a result of job losses.

While some inventories may have grown due to production cuts and a drop in sales, it’s uncertain whether generous incentives will continue or whether the industry is prepared to handle pent-up demand if the economy turns around. It’s that uncertainty that’s behind the push for Cash for Clunkers.

Analyst Jonas believes that the reconstituted program may be needed to get sales moving again. He told Barron’s that “we don’t think the [car makers] are going to fail the way some did back in 2008 and 2009. But the industry is going to need support.”

He projects that the government will spend more than the $3 billion the last time. “We’re expecting about $10 billion of stimulus that drives $50 billion of purchases and adds about four million of SAAR [seasonally adjusted annualized rate, a measure of car purchases] over a six-month period beginning in the fall and then into early 2021.”

So far, auto execs have been noncommittal to the program’s revival. Ford F, -3.34% is said to be holding internal discussions on the possibility. Mark LaNeve, Ford’s vice president of U.S. marketing, sales and service, told Automotive News, “We think some level of stimulus somewhere on the other side of this would help not only the auto industry and our dealers, which are a huge part of our overall economy, but will help the customers as well. We’re in discussions about what would be the most appropriate.”

Also see: These 3 EVs are the lowest cost to own over 5 years

And: Ford posts $2 billion first-quarter loss, sees even bigger loss in next quarter

He added that “Cash for Clunkers was very effective at that time. It would be nice to think we could have something equally as effective for 2020 when we get out of this because it was a great program.”

Congress has yet to weigh in with a formal proposal, but Debbie Dingell, a Congresswoman whose district includes Ford headquarters, told Bloomberg: “It’s out there as an idea along with many other ideas. We’re working with the entire ecosystem of automakers, workers, their unions, suppliers, dealers and consumers.”

PrevPreviousMutual Funds Weekly: These money and investing tips can help you decide whether to ‘sell in May and go away’
NextNerdWallet: Need cash? Try your life insurance policyNext