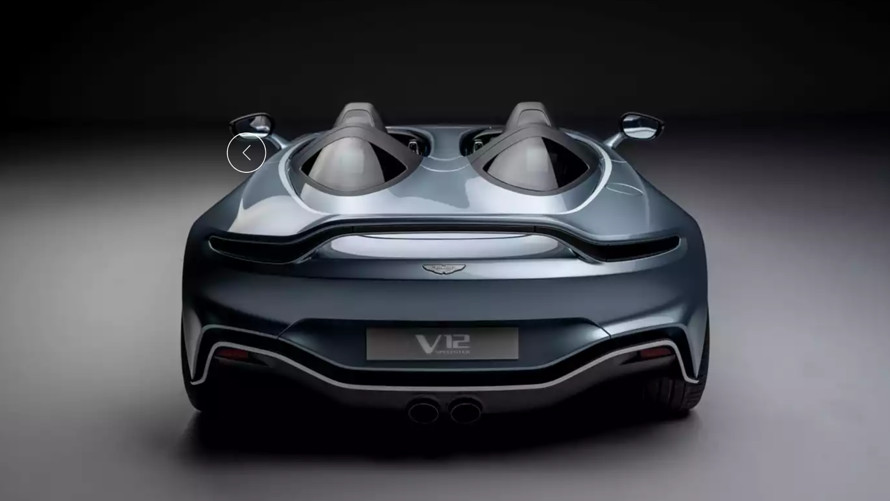 Created by the brand’s “Q” in-house customization division, the V12 Speedster features unique bodywork rendered in carbon fiber. The open 2-seater idea references the CC100 Speedster concept of 2013, but the design here is mostly all new. Vantage design cues adorn the front and the rear with visual interest turned up to 11. A new styling features is a nostril in the hood that makes room for the taller V12. There’s also a rear diffuser that incorporates a center-exiting exhaust.

The wildest design elements, obviously, are at the center of the car. There’s no roof or windshield. Aston says that removing the windshield “add[s] to the visceral engagement.” The driver and passenger each sit within their own separate oval-shaped cutout in the bodywork. A fairing behind each bucket seat is made of see-through material. The cover shows off the helmet stored within. In place of a glovebox, there’s a removable leather bag. The passenger compartment materials include carbon fiber, leather, and aluminum.

In contrast to the Vantage, which uses a twin-turbo V8 good for 503 horsepower, the V12 Speedster bolts a twin-turbocharged 5.2-liter V12 to 8-speed dual-clutch automatic transmission. The output here is 700 horses (down slightly from the 715 in the DBS Superleggera) and 555 lb-ft of torque. In this lightweight body, that’s enough for a zero-to-62-mph time of 3.5 seconds. The electronically limited top speed is 186 mph. Carbon ceramic brake rotors stop the V12 Speedster. Meanwhile, the suspension features adaptive damping with Sport, Sport+, and Track modes. The 21-inch center-lock wheels are unique to this model.

The pictured car shows what Aston characterizes as F/A-18 specification, inspired by the McDonnell Douglas jet fighter of the same name. The exterior is executed in Skyfall Silver and the interior is black. That combo is available, but buyers are invited to personalize the V12 Speedster using the full services of the Q division.

With the V12 Speedster, less is more—a lot more, in terms of price. The Aston Martin V12 Speedster opens at $950,000, far above the recently introduced Vantage Roadster at $161k, and that model comes complete with a windshield and a power top. Those hard-core souls who opt instead for Aston’s truly wind-in-the-face offering can expect to take delivery in the first quarter of 2021.

This story originally ran on KBB.com.

PrevPreviousOutside the Box: Americans need money — not more reasons to spend — or the coronavirus recession could be even worse
NextKelley Blue Book: The new VW Atlas Cross Sport: midsize SUV crossover with a sportier personalityNext