‘Being anti-racist is a verb, so it requires action’: Don’t stop demanding racial equality — how to become a lifelong ally 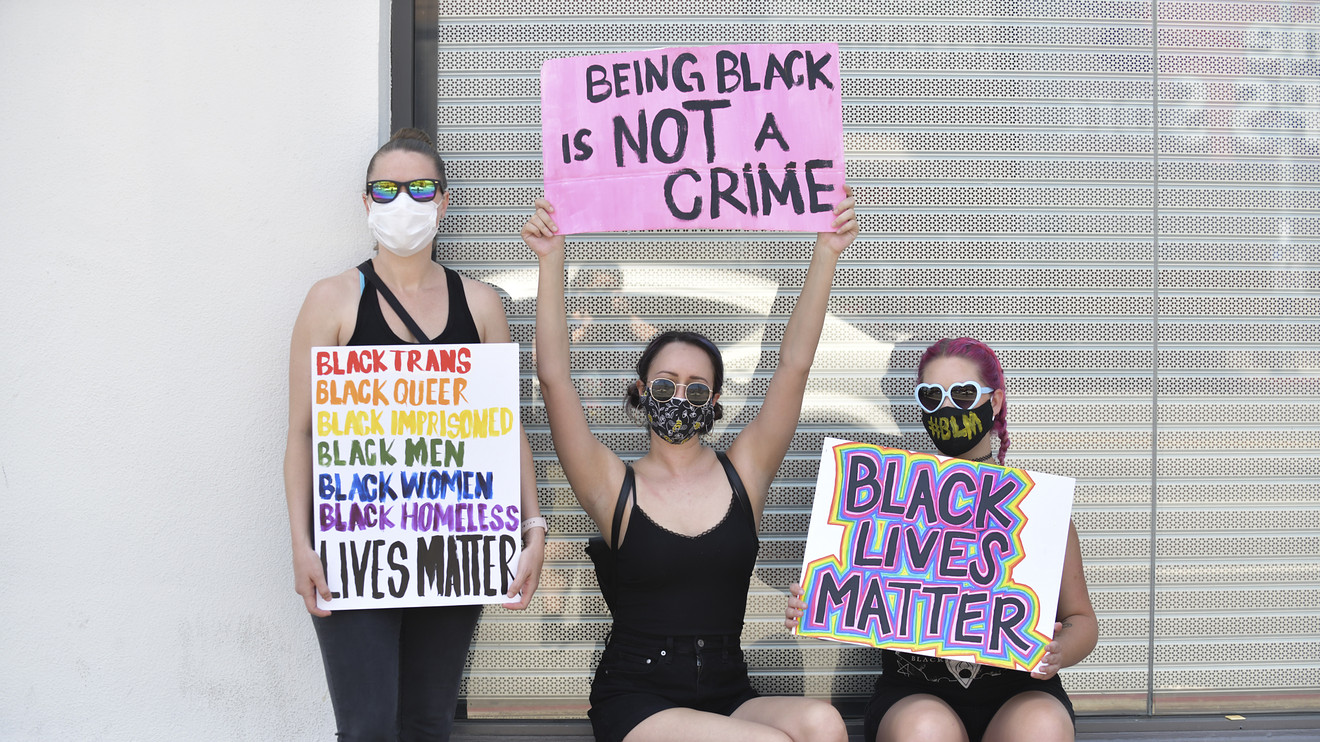 Maybe you posted a black square on Instagram FB, -3.39%, donated money to a racial-justice organization, reflected with friends about your own privilege, or purchased a title from one of the internet’s many anti-racism reading lists in the last three weeks.

But as nationwide protests and a reckoning with America’s racist past —and present — hurtle onward, activists say the work is far from done. In fact, they say, today’s conversations are only the beginning.

“Realize that what’s going on now is part of a long-term pattern of racial injustice, discrimination, exploitation and violence,” Paul Kivel, an educator, activist and author of the book “Uprooting Racism: How White People Can Work for Racial Justice,” told MarketWatch. “It’s really important for us to understand that we need to be always working for racial justice, whether there’s dramatic moments or not.”

The country’s current scrutiny of police violence, discrimination and historic inequalities doesn’t show signs of abating anytime soon. But in the event that it does, you can still work toward racial equality in your everyday existence — and stand with your Black friends and coworkers even after the statements of solidarity fade from social-media feeds.

You can start, of course, by understanding the history of Black-owned businesses and making the conscious decision to shop at them. (MarketWatch has your starter guide here.) Here are more ways to keep your foot on the racial-equality gas pedal at home, at work and out in the world:

Become a “racial equity learner” and find ways to learn about how racial inequality persists today, said Rashawn Ray, a University of Maryland sociology professor and fellow at the center-left Brookings Institution.

“We need to educate ourselves about how racism looks and operates and what the history is, how it plays out today, and how are people of color organizing to address it,” Kivel said. “We should be turning and listening to people of color, and there’s wonderful films and books and YouTube GOOG, -2.21% clips and art and dance and music.” Race-focused book lists abound; they often include a mix of introductory texts about race and literature by Black authors.

Leslie Mac, an organizer and digital strategist, suggested reading “as many books and content from Black women as you possibly can.” She recommended contemporary works by authors such as Charlene Carruthers and Crystal Fleming, as well as historical works by authors like Frantz Fanon and Angela Davis.

“If you’ve ever heard that a Black writer or thinker is ‘too radical,’ that’s who you should be reading right now,” she said. “Any book that is imagining a world that looks different from the one that we have, and is not just talking about things in theory, is really useful right now and will move people beyond that 101 framing, which is ‘I know that racism exists.’”

As for learning from your Black friends or coworkers, “don’t have conversations that could easily be handled by a Google search,” Mac said. “You can have a conversation with them about their experiences, about your behavior with them. Those are conversations that can be fruitful,” she said. “But if you’re just looking to download information from Black people, just skip it.”

The next step, Ray said, is to become a “racial equity advocate.” That means holding people accountable for their actions and statements about inequality at the dinner table, in your friend group and at work, he said. Don’t let racist statements go unchecked.

“Part of the fundamental way you know you’re an advocate is if you speak up and speak out when the group that’s being vilified is not present or when they cannot help themselves,” Ray said. “If you don’t say anything, you’re letting that racist statement ride, and it’s assumed that you support it even if you don’t. You have to purposely say something about it.”

Pushing back with responses like, “I actually don’t agree with that,” “I’m not sure if that’s true,” or “I’m not sure if we should be talking about people like that” can go a long way, especially if there are other people observing, he said.

You can also be an advocate in public. Notice a pattern of Black customers at your local restaurant not being served or only being seated in the back corner? Ask for the manager or write a letter to the head of the company later. See someone being mistreated by the police or others? Record video of the encounter. “Without mobile phones, we wouldn’t know what happened to George Floyd, Ahmaud Arbery, Christian Cooper,” Ray said. If you have the time and opportunity, you can also acknowledge what happened to the person and let them know you didn’t agree with it, he added.

The bare minimum you can do to promote racial equality is to break the silence, Kivel said. “Part of how racism continues is that we don’t talk about it — so we need to have the conversations with our family and friends, with our children, with our neighbors, in our workplaces,” he said.

“ ‘When the tenor of the conversation shifts, people are still going to be sitting with their experiences of structural racism, systemic racism and the daily microaggressions — and they’re going to look to these same coworkers who blacked out their square on Instagram that day and put up the hashtag and sent them a note that said, “I am with you.”’ ”

— Laura Morgan Roberts, a professor of practice at the University of Virginia’s Darden School of Business

Take ownership and responsibility for trying to positively change the culture of your workplace, said Laura Morgan Roberts, a professor of practice at the University of Virginia’s Darden School of Business who has researched and consulted on diversity.

Be on the lookout for microaggressions, listen for stereotypical comments disparaging a person’s qualifications, and “call out that flawed assumption or characterization” in the moment, she said.

Be proactive to ensure that people of color are included in meetings and important decisions, Roberts added; if you notice your Black coworker was left off an impromptu Zoom ZM, +1.22% meeting invite, take the extra step to loop them in. When a coworker of color does really well on a project or makes an important contribution to the team, shine a light on their accomplishments.

If you have some authority at work, use your newfound enlightenment on race to promote greater equality in hiring and promotion decisions, Roberts said. Make sure people of color are being considered for leadership roles, task forces and other opportunities that could benefit them and their career. “Their name might not be considered naturally when people talk about high potential, so throw that person’s name in the hat too,” she said.

If you’ve put yourself forth as an ally during this time, Roberts added, expect that coworkers of color might eventually approach you to share an experience they’ve had in the workplace — and be ready to offer validation, support, empathy and compassion, rather than dismissing or second-guessing their account.

“When the tenor of the conversation shifts, people are still going to be sitting with their experiences of structural racism, systemic racism and the daily microaggressions — and they’re going to look to these same coworkers who blacked out their square on Instagram that day and put up the hashtag and sent them a note that said, ‘I am with you,’” she said. “They’re going to test that commitment by sharing an incident or an episode that otherwise they would’ve never told their white coworker about.”

“ ‘Being anti-racist is a verb, so it requires action for you to claim that particular mantle — and it requires consistent action.’ ”

Leverage your money, time and clout

“Realize that because we have various benefits and privileges that we get from being white, we can use those to leverage resources for racial justice,” Kivel said. One of those resources is money, of course, but there’s also time, energy, experience, skills and connections, he said.

Support and volunteer with grassroots organizations led by people of color that are “organizing for systematic change for racial justice at an institutional level,” Kivel said, and addressing issues such as housing, jobs, education and health care. Mac said she often looks for Black-led organizations that truly understand that “all Black lives matter” — meaning they’re supportive of Black trans lives and Black LGBTQ+ lives. Scrutinize the work an organization does and see whether it’s working alongside other groups, she said, because “very rarely does good community organizing happen in a vacuum.”

“The piece that’s important is that whatever work you’re trying to do is to complement and be in concert with the work that Black, brown and Indigenous organizers are doing on the ground,” Mac added.

Use your power to influence systems

Interrogate the systems that you have direct influence over and participate in, whether that’s the PTA or a board you sit on, Mac said. “Being anti-racist is a verb, so it requires action for you to claim that particular mantle — and it requires consistent action,” she said.

In that vein, the third step in Ray’s framework is to become a “racial equity broker,” meaning you advocate for racially equitable and transparent policies in spaces like your workplace, place of worship, homeowners’ association and kids’ school. “You’re interrogating the rules, policies, practices and laws that are in place that govern what you do,” he said.

“Speaking as a white person in those kinds of public settings, whether it’s a school-board meeting or a city-council meeting, does carry weight,” Kivel said.

“It’s important to think about who we vote for and that we support candidates of color — not indiscriminately, because we care about what they stand for [and] what their politics are,” Kivel said. He urged voting for candidates who are working toward goals like affordable housing, health care for everyone and safe communities. Consider candidates’ stances, behavior and past records on racism, he added: “Are they going to take us toward racial justice, or are they going to entrench us further in division?”

PrevPrevious‘They get a get-out-of-jail-free card’: How qualified immunity protects police and other government officials from civil lawsuits
NextTwitter employees are getting an Election Day perk this NovemberNext