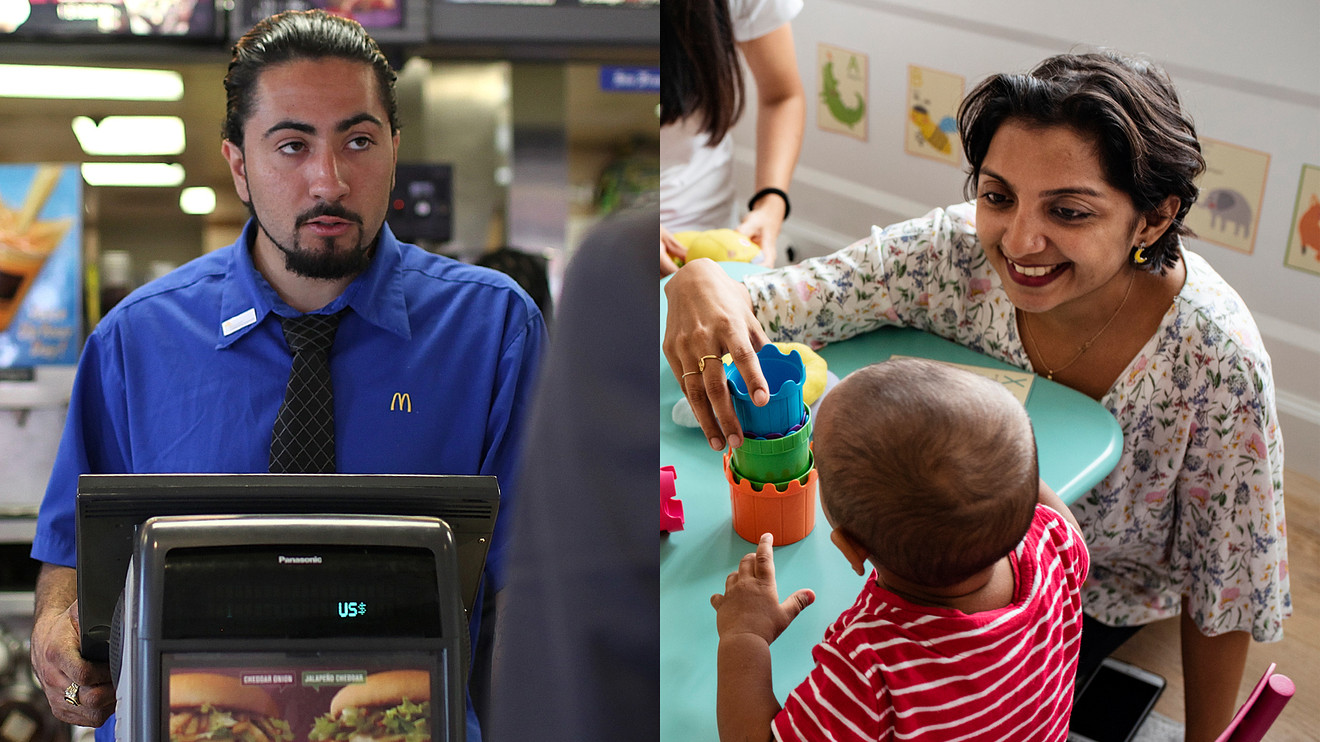 “Every psychologist in the world knows zero through 4 are the most important years of human life, intellectually and emotionally. And yet our current child-care system is an embarrassment, it is unaffordable. Child-care workers are making wages lower than McDonald’s workers,” the Vermont Senator said at Tuesday’s Democratic debate, where other candidates also hammered on child-care workers’ low pay despite the climbing costs to families.

Salary statistics suggest Sanders has a point about paltry pay.

Meanwhile, hourly rates for a McDonald’s crew member can range between $7 and $15, according to the employment website Glassdoor.com. (McDonald’s MCD, +1.10% did not immediately respond to a request for comment.)

It’s not even close when it comes to fast-food managers. They can make at least twice as much as child-care workers, and sometimes far more. For example, Taco Bell YUM, +0.68%  managers at company-owned stores can make between $50,000 and $80,000 and the company will test a $100,000 salary in some locations this year.

“We need to fundamentally change priorities in America,” said Sanders, who proposes a universal child-care program. (The Committee for a Responsible Federal Budget, a non-partisan think tank, estimated in 2016 that Sanders’s proposal would cost $350 billion.)

Sanders wasn’t alone Tuesday on the argument that child-care workers get paid too little considering the importance of what they do.

The irony is that while child-care pay may be low, the cost of child care is significant and growing. Inflation adjusted child-care costs jumped 49% between 1993 and 2018, according to Freddie Mac FMCC, -0.95%, the government-sponsored mortgage finance company.

Families last year paid $715 a month on average for child care, according to Freddie Mac. Families now pay an average of $852 a month to send their kid to a child-care center, and monthly costs for a nanny are now $2,384, according to Care.com, CRCM, -0.13%   a website where parents can search for caregivers.

Federal, state and local governments spend $34 billion annually on early care and education, according the Economic Policy Institute, a left-leaning think tank. Households, on the other hand, spend approximately $42 billion for child care and early education, the researchers said. They estimated that median hourly pay for early education teachers was $12.12 in 2019.

In 2018, President Donald Trump allocated $8.1 billion for states to use for low-income family child care, a $2.4 billion increase to the fund. Late last year, he authorized spending to give federal workers 12 weeks of paid parental leave.

Families shouldn’t spend more than 7% of their income on child care, the Department of Health and Human Services recommended in 2016. But Child Care Aware of America, an advocacy group pressing for affordable child care, says families in some states can pay $9,100 to $9,600 a year, which can amount to more than 10% of national median income for a family with one child.

The debate discussion of child care started with a question to Buttigieg from a woman who said she had to quit her job because child-care costs were sucking up two-thirds of her pay.

He said government officials need to get the cost to “7% or below, and zero for those families who are living in poverty.” He said child-care cost problems are happening across the income ladder.

PrevPrevious‘Everyone and their brother was messaging me on Facebook.’ DNA tests reveal long-lost relatives, but making contact is a minefield
NextThe Margin: Millennials prefer White Claw over wine — and it’s shaking up the alcohol industryNext