James Wesley Rawles is hunkered down at an undisclosed location west of the Rockies. “I’m not at liberty to say what state I live in,” he told MarketWatch via internet phone. “I live in the inland Northwest… more than two hours from any decent shopping. We could lock our gate and say goodbye to the world for two or three years and get along just fine.”

He’s on his ranch with a large family. “I’m not at liberty to discuss it,” says Rawles, a former U.S. Army Intelligence officer. “Let’s just say it is a very large family.”

This is a key moment for “preppers” or “survivalists” like Rawles. While the coronavirus has spooked markets into massive sell-offs and sent shoppers to stores like Costco COST, +7.66%   to stock up on supplies, survivalists have been prepping for something like this for years. Even decades.

“I was a ‘prepper’ long before that term even came into being,” says Jim Cobb, author of Preppers’ Long-Term Survival Guide and Urban Emergency Survival Plan. “Since I was 16 years old,” says Rawles, when asked when he first started readying himself for a possible apocalypse. “That was in 1976.”

‘Be prepared for whatever life throws at you.’

Nobody knows for sure, but there may be many more preppers in the U.S. The term covers everything from “doomsday preppers” in the northern mountain states to people who just make sure to be stocked up at home in case of disaster.

Rawles, the author of the “Patriots” doomsday novels, and the website survivalblog.com, has been living at his undisclosed ranch since 2006. He is a messianic Christian and a controversial figure. “The general public is clueless,” Rawles. “I call them the GDP — the Generally Dumb Public.”

Most people will be unprepared if there are shortages, or if they have to go into quarantine, he says. He’s watched the run on things like N95 face masks — despite health officials’ recommendation that the public not buy them — without surprise. “It is at times like this that the GDP wakes up,” he says. “My motto is panic now and beat the rush.”

“I’ve been doing it my whole life,” says “Doc Montana,” a survivalist who asked that MarketWatch not share his real name. “[A] lot of urban people aren’t prepared for a disaster,” he adds.

Cobb, meanwhile, lives in a more mainstream environment in Wisconsin, where he works as a disaster preparedness consultant and a writer. “I’m not an ‘end of the world is coming’ kind of guy,” he says. “It isn’t a case of having to batten down the hatches because the zombies are going to get us. For me, preparedness is common sense. Be prepared for whatever life throws at you.”

Some preppers say the coronavirus was on their radar in January

Oil slumped, he pointed out. Copper, a key leading indicator of economic activity, plunged. The Baltic Dry Index, which tracks demand for global shipping, went south. He and many fellow preppers think the virus is likely to be a so-called “Black Swan event” — the term coined by author Nassim Taleb to describe major, sudden, and unpredictable shocks to the system.

Rawles, who says he is ready for his long-expected doomsday a scenario, says he holds his money in platinum, silver, and U.S. nickels, which he believes will be valuable because of their base metal content.

So far, the World Health Organization is calling coronavirus, or Covid-19, an epidemic rather than a pandemic. A Worldwide, there had been over 89,000 cases and 3,000 deaths as of Monday. However, more than 80,000 of those cases are in China.

The WHO is calling coronavirus an ‘epidemic’ rather than a ‘pandemic.’

The WHO has declared the coronavirus a “global health emergency,” the organization’s highest alert level.

As President Trump confirmed during last week’s press conference on the disease, the federal government does have contingency plans, even including quarantining cities, if it should get much worse.

Many preppers don’t believe the reassurances about the scale of the epidemic, least of all the information coming out of China.

They both agree on one thing: a worst-case scenario is the most likely outcome. Some, like Rawles, fear the worst from the coronavirus. He thinks it is “unstoppable” and “will be all over the planet in the next months.” Doc Montana believes the authorities are trying to warn people to get ready without causing a stampede.

But others are more philosophical and, perhaps, less apocalyptic. “There is so much goofy stuff that is floating around on social media,” says Cobb. “You don’t know what’s right and what’s wrong.” His take? “No. 1, don’t worry about what you don’t know. Worry about what you can control. As a practical matter, prepping for a pandemic isn’t that different from prepping for a sudden job loss or a power outage.”

Most preppers are nothing if not dramatic, and they have a variety of terms to describe total disaster. Most of them are acronyms.

There is TEOTWAWKI, which is actually pronounced as a word, teo-twawki, and stands for The End Of The World As We Know It. WROL means Without The Rule of Law. GOOD means Get Out of Dodge. And SHTF refers to that moment when the, give or take a profanity, Stuff Hits the Fan.

While some, like Rawles, are already hunkered down at their remote ranch, others are ready to flee, a move known among preppers as “bugging out.”

The ranches are usually in the “American Redoubt” in the northwest, covering Montana, Idaho, Wyoming, and eastern Oregon and Washington. It is a term coined by Rawles that means a political migration to mountain states in the northwestern U.S. considered a place of refuge for libertarian, conservative survivalists.

Up in that vast wilderness the population is thin, cities are distant, gun laws are relatively lax, and there is plenty of land, water and hunting.

“Most of us have an alternate location,” says Doc Montana, who says he lives and works in a mainstream community. “Mine is in western Montana,” he says. (Hence the moniker.) “It is thinly populated. It has abundant natural resources. It isn’t really on the road to anywhere.” It is even surrounded by other largely empty states. “I look at Montana as having buffer states around it,” he says. 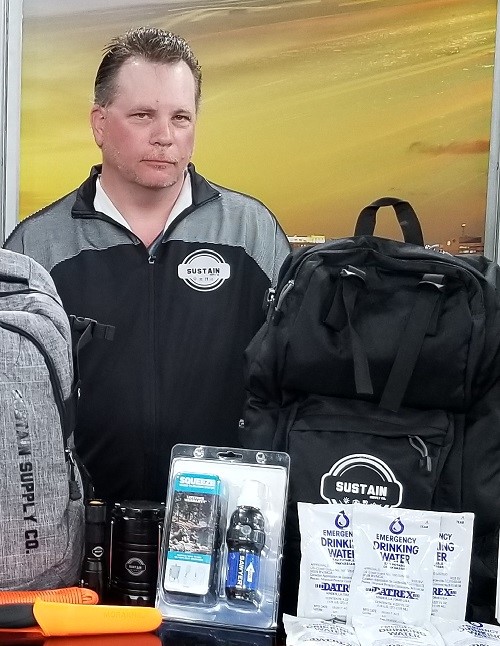 But prepping doesn’t have to mean “bugging out,” preppers say. It can also just mean “bugging in” — hunkering down at home. Even if you get sick and get quarantined at home, you, too, will be “bugging in,” they say.

So what do they advise? Make sure you have plenty of food, fresh water, medicines and first-aid supplies, they say. Also: electrolyte replacement drinks like Gatorade PEPS, -0.07%, prescription medicines and over-the-counter medicines like aspirin and ibuprofen. The best foods are long-lasting, easy to store staples that you would eat anyway, like pasta, beans, rice and honey, they add. Rawles recommends multivitamins to supplement any limited quarantine diet. Freeze fresh foods and treats as well, if you can.

Doc Montana says he makes sure about half his food stores are things that can be cooked easily. ”If everyone in your house is sick,” he asks, “can you crawl to the kitchen to prepare meals?”

Write down everything you love about your family, in case you are quarantined.

He also suggests plastic sheeting, masks and goggles. They’re also stocked up on basic supplies, from toilet paper to candles and matches — and plenty of cash. “Think of it as a hurricane,” says Doc Montana. Jim Cobb regards it as camping at home.

The more apocalyptic go further: Fire extinguishers, in case the fire department is put out of action, your own generator, and fuel — and a gun, if it’s legal and you know how to use it properly. Rawles jokes that he recommends “Beans, Bullets and Band-Aids.”

Preppers say they have stocked up several gallons of water, per person, for each day they are expected to bug in. (They also stock water filters, such as those made by Sawyer, in case the town water supply fails).

“If we had to shutter the doors and lock the windows and not leave our house, we could go four to six weeks, if not longer,” says Cobb,. “[A month], to me, is the absolute minimum time of independence that people need to be prepared for,” adds Doc Montana. “In a nutshell, you need to be prepared to live in isolation for at least two months,” says Rawles, adding: “and preferably two years.”

Cobb also advises writing down a list, right now, of all the qualities you love and admire about your other family members. That way, if you end up being quarantined together for days or weeks “when you reach the point that you’re ready to throttle them, because they are just always right there and they are driving you nuts, you’ll have that list to remind you of why you want to keep them around.”

Cobb says it’s “common sense” to be prepared. And if disaster doesn’t strike? Cobb says it’s a win-win: “You just don’t have to go grocery shopping for a while.”

Capitol Report: Here’s where the economy stands as the U.S. chooses between Trump and Biden

PrevPreviousRipple Criticized for Unlocking XRP Worth $230 Million from Escrow
NextPersonal Finance Daily: How America’s extreme ‘survivalists’ are preparing for a worst-case coronavirus epidemic and 5 last-minute tips to save money before Tax DayNext