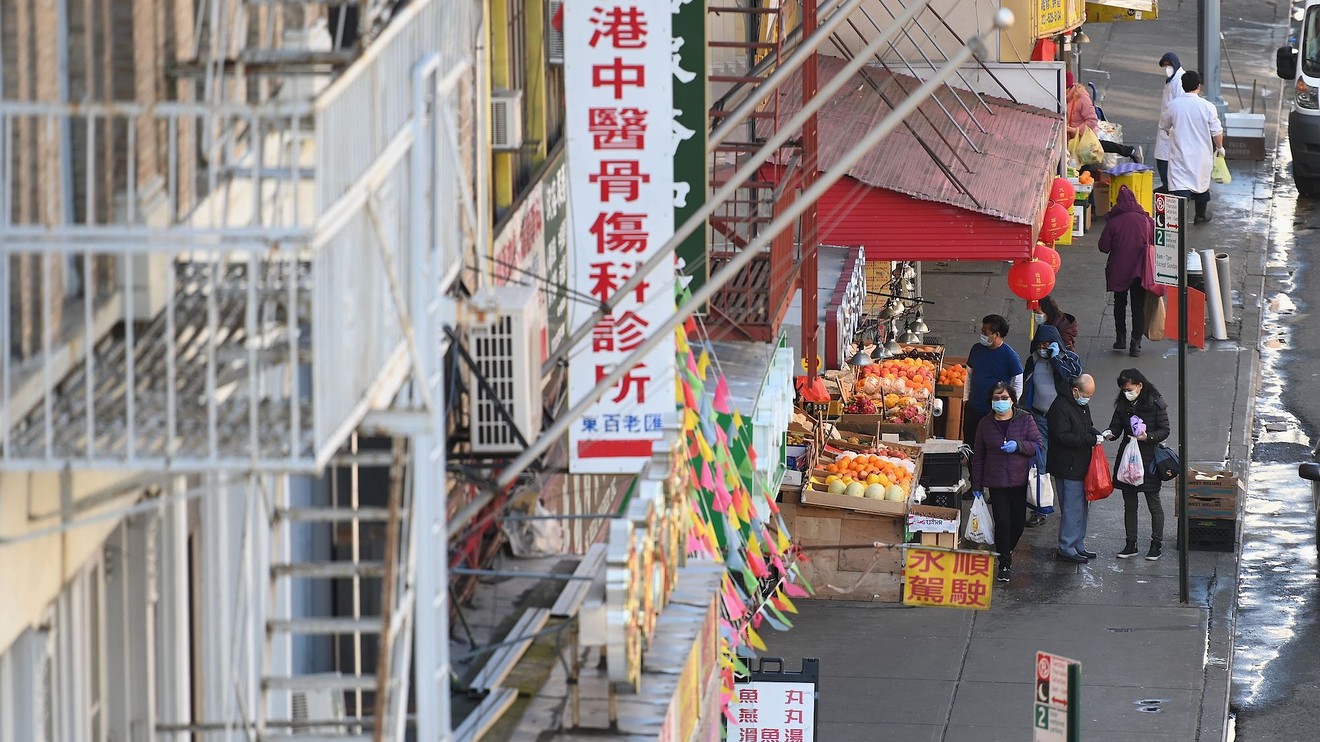 One woman in Brooklyn was hit over the head with an umbrella. A man waiting for the subway was spat on, as a stranger threatened to shoot him.

For months, Asian-American community leaders in New York City have been worried about anti-Asian prejudice during the coronavirus epidemic that has claimed thousands of lives. As the city’s lockdown heads into its eighth week, fears of street harassment and violence persist, along with new ones about the underreporting of crime statistics, and what will happen when the city begins to reopen in the future.

In Queens, on April 26, a man allegedly saying racist things broke the phone of an Asian-American woman who tried to maneuver away from him, the New York Daily News reported. According to police, the man allegedly shouted, “You stupid —– —-. You’re the ones that brought the virus here!” In the West Village of Manhattan earlier in the month, racist graffiti was written on the wall of the winter vestibule of Jeju Noodle Bar, a Korean restaurant, Eater reported.

In December of 2019, China reported a cluster of pneumonia cases in the city of Wuhan, according to the World Health Organization (WHO). Over the next few months, the virus spread to the Middle East, Europe, and the U.S.

One-third of Americans have witnessed someone blaming Asian people for the coronavirus, according to a poll conducted in mid-April by the Center for Public Integrity and Ipsos. A group of U.S. senators, including Elizabeth Warren and Bernie Sanders, signed onto a letter on April 10 requesting that the U.S. Commission on Civil Rights issue guidance to federal agencies on “preventing and addressing anti-Asian racism and xenophobia related to the coronavirus disease.”

As of April 26, there have been 12 victims involved in anti-Asian corona-related crime incidents this year, according to the NYPD’s Hate Crime Task Force.

However, there have also been 115 recorded incidents in New York City of harassment and discrimination against Asian-Americans related to COVID-19 since Feb. 1, according to a spokesperson for the New York City Commission on Human Rights. The commission formed a COVID-19 Response Team in the end of March compromised of 24 people, including eight attorneys, to handle an influx of calls about harassment and discrimination related to the outbreak. As of April 19, there were 26 active investigations related to COVID-19, including those involving housing and employment discrimination.

Read: How New York is battling a second crisis alongside COVID-19: Mental health

“As far as Asian Americans are concerned, a lot of it is harassment on the street,” said Sapna Raj, deputy commissioner of the Human Rights Commission’s Law Enforcement Bureau. “But it can also be that someone is not allowed to come back into the house because a landlord is afraid that they are of a particular national origin, and they don’t want them to come back into that house if they have traveled to China and are coming back in.”

Flora Ferng is the Human Rights Commission’s East Asian Communities Liaison. At the beginning of the pandemic, she helped run workshops about health issues and xenophobia surrounding the virus in Flushing, Queens, Manhattan’s Chinatown, and Sunset Park, Brooklyn. She is now involved in online town halls, conference calls with community leaders, and making anti-discrimination videos for social media.

Ferng said she’s getting phone calls on evenings and weekends from worried New Yorkers who have never experienced this level of discrimination before. One of Ferng’s neighbors lives alone, and recently experienced street harassment. She’s now afraid to go out and run essential errands.

“That’s the kind of thing we worry about,” Ferng said.

Leaders in the Asian-American community who spoke with MarketWatch at the end of March said their anxieties are unchanged.

Also see: Pandemics affect everyone: What’s this one doing to the kids?

Jo-Ann Yoo, executive director of the Asian American Federation, has stopped taking walks in her Greenpoint neighborhood at night because of the things that people have said to her on the street.

“This is a regular thing these days,” said Yoo. “Everybody’s experiencing this and it’s really normal and it’s scary.”

Mae Lee, executive director of the Chinese Progressive Association, based in Manhattan, said people are taking precautions for their own safety during the pandemic they never would have otherwise. Before the pandemic hit, fear of riding the subway might center around crimes like robbery. Now, people worry about racial harassment and violence.

“They are a lot more cautious about public transportation. Some have even taken to carpooling to work,” Lee said. “They’re spending on gas and driving to work specifically because of this.”

Community leaders are also concerned that incidents of bias, harassment and violence are underreported, and therefore undercounted by government agencies.

“I’m on a lot of calls with different law enforcement agencies. And the stories that we are hearing is that people are afraid to report. They don’t want to report,” Yoo said.

There are official channels through which to report incidents of bias. New York state Attorney General Letitia James launched a hotline for people to report discrimination related to COVID-19, and the New York City Commission on Human Rights, which handles civil bias and discrimination incidents, encourages anyone who has been targeted to call 311. But not everyone is comfortable going to the police or calling a city agency.

Yoo’s organization, the Asian American Federation, launched a website in early April, where people in the tri-state area can report their experience.

“Now the city is talking to people, now they’re having webinars. And I’m grateful for that,” said Yoo. “But the other side of that, as an advocate, is to say, ‘Why didn’t this happen much faster?’”

PrevPreviousPersonal Finance Daily: Why Americans are willing to share their personal information in drug trials but not for coronavirus contact tracing efforts and 4 things you can do to help kids cope with upheaval from coronavirus quarantines
NextDeep Dive: Here are Friday’s biggest stock-market losers, driven lower by disappointing earnings and a shrinking manufacturing sectorNext