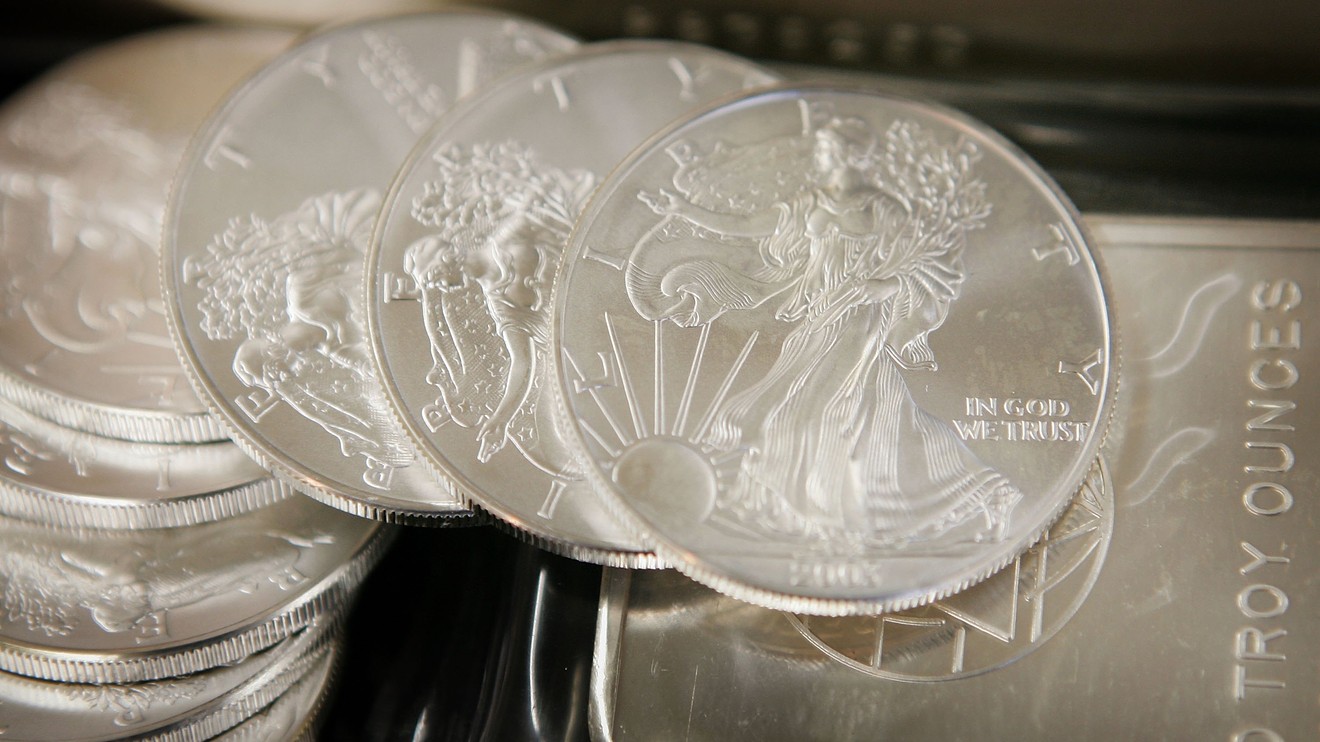 Silver prices have dropped to their lowest level since 2009, boosting demand for the physical metal at a rate not seen in a decade.

Supplies of physical silver, as well as gold, “remain well below extremely strong demand,” said Dana Samuelson, president of precious-metals dealer American Gold Exchange, Inc. “The fall in the underlying gold and silver prices, coupled with the potential recession due to the sharp economic downturn the coronavirus is causing has spurred the public to buy physical precious metals at the fastest pace in 10 years.”

On March 12, the United States Mint said it temporarily sold out of American Silver Eagle bullion coins. “Our rate of sale in just the first part of March exceeds 300% of what was sold last month,” the Mint said.

Sales of the one-ounce American Silver Eagle coins were at 3.1 million so far this month, as of Wednesday, compared with total sales of 650,000 in the month of February, according to data from the Mint.

“With both the U.S. Mint and the Royal Canadian Mint on back order for the most popular one-ounce gold and silver coins in the North American market, dealers have scrambled to buy anything that remains available to buy, driving bids substantially higher for all physical gold, silver…coins and bars that are immediately available,” said Samuelson.

‘The poor man’s gold is on sale today and the fire sale will not last unless there is an all-out deflationary crash which brings its own appeal in holding silver as a hedge.’

“The poor man’s gold is on sale today and the fire sale will not last unless there is an all-out deflationary crash which brings its own appeal in holding silver as a hedge,” said Peter Spina, president of silver news and analysis provider SilverSeek.com.

He disclosed that he recently made a large purchase of silver as its price ratio to GCJ20, -0.35%  limbed to historic levels at roughly 130 ounces of silver to buy one ounce of gold.

Read: Gold is setting records dating back over 5,000 years—against silver

Silver prices have seen sharp declines as “institutions have dumped silver for cash to pay for margin calls and other obligation, as well as hoarding cash,” said Edmund Moy, who was director of the U.S. Mint from 2006 to 2011.

He told MarketWatch that the rise in silver bullion demand is “just the beginning,” and is “primarily driven by individual investors who see silver as an affordable safen have and because of the lower prices, a buying opportunity.”

“Affordability is a major factor…silver appeals broadly to a less wealthy investors but a small change in prices is a larger percentage change for silver—and that upside attracts additional investors,” said Moy.

“Eventually, low silver prices will catch up to limited physical supply and increased physical demand,” he said. “And once the global economy begins to recover from this pandemic, silver demand from industry will recover too.”

But it’s silver’s industrial aspect that makes some analysts a bit more cautious.

Right now, silver futures look “ready to at least bounce in a significant way,” said Spina. However, “if there is another global market selloff, silver futures could get one more historic dump to [the] $10 area.”

“Much of the industrial demand news is not going to be good or great for silver for the coming weeks or months, so we need to get through this biggest contribution factor to silver,” he said. “Until then, investment demand is returning and if it keeps like this for several months and industrial [demand catches up]…it could really squeeze the price right back up and quickly!”

PrevPreviousDispatches from a Pandemic: ‘The sunbathers all seemed to be talking about coronavirus’: Australians brace for the end of summer — and the start of flu season
NextThis Denver delivery man was tipped $25 (twice) and doubled his earnings the day restaurants closed due to coronavirusNext