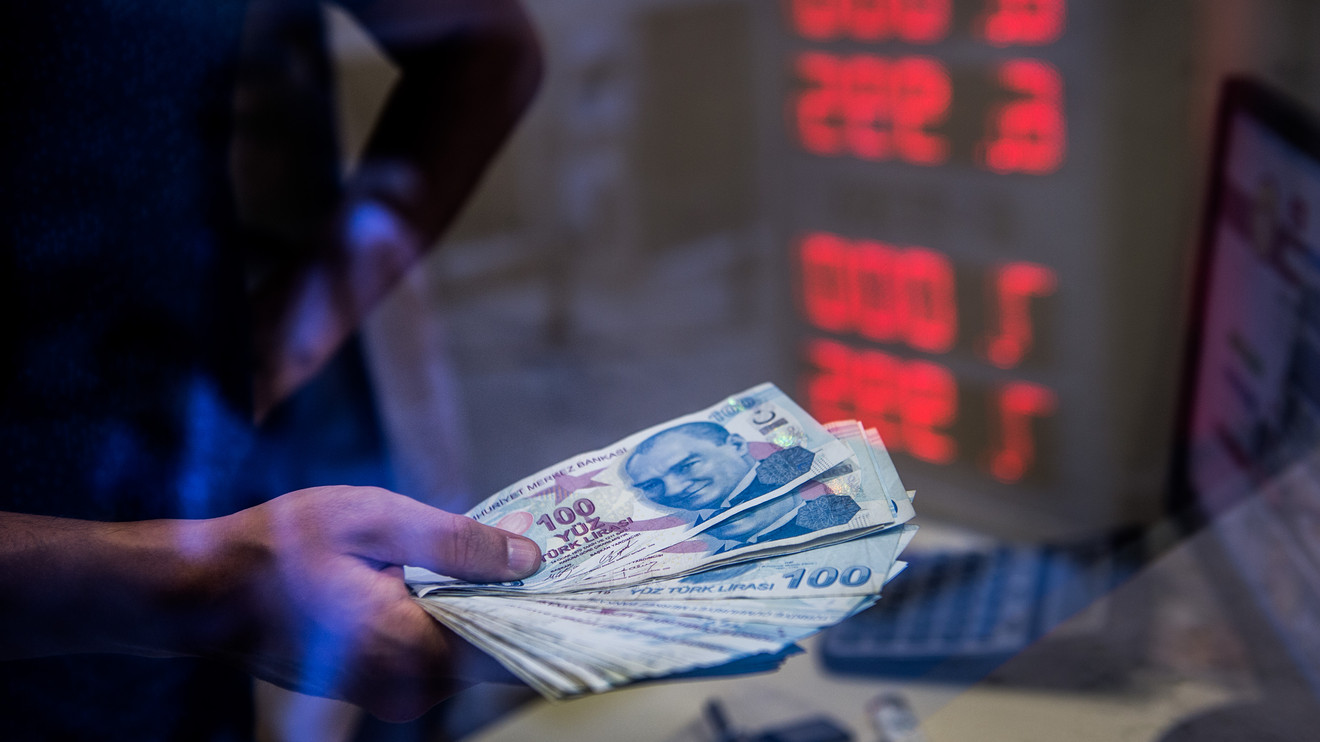 The Turkish lira fell to a record low against the U.S. dollar this week and reports say the government has tried to stop the slide by taking action against three foreign banks.

But a bigger problem may be the dwindling foreign currency reserves held by the Turkish central bank, analysts say.

The Turkish government has been vigorously trying to keep the Turkish lira TRYUSD, -0.24% beneath the psychological threshold of 7 lira against the U.S. dollar. That is because the depreciation of the lira burdens companies in the country that hold dollar-denominated loans. But the turbulence in the lira also is a hit on sentiment, as Turkish citizens consider the exchange rate a representation of the health of Turkey’s economy.

The lira fell more than 1% to around 7.2690 per dollar on Thursday. The currency has fallen 1.7% so far this week and 20% in the year to date against the greenback, FactSet data show.

The central bank has been using its foreign currency reserves to prop up the lira against the U.S. dollar for months.

Turkey’s net foreign currency reserves are approximately $16.2 billion, according to estimates published by the former undersecretary of the treasury Mahfi Egilmez. However, this figure includes currency swaps entered into with domestic banks. Once those are subtracted, the net currency reserve is in negative territory at approximately minus $13.4 billion.

“The magic that makes Turkey’s financial system work has long been the foreign currency swap market,” wrote American economist Brad Setser, in a Tuesday blog post for the Council on Foreign Relations.

“Turkey’s banks are thus simultaneously a source of short-term strength for Turkey, as they are still in a position where they can lend some of their excess domestic foreign currency deposits to the central bank to help the central bank out, and a medium term vulnerability—as the banks will eventually need some of their surplus foreign currency to pay back their external creditors,” he wrote.

One Turkish economist, who declined to be named to avoid government backlash, said: “The central bank is using the reserves to slow down the depreciation of the currency. Meanwhile, policies where the real interest rate is negative is making the local currency unattractive and other policies don’t instill confidence. It is a very obvious set up where everyone is on edge and fearing something will happen.”

Meanwhile, Turkey has nearly $170 billion worth of debt to be repaid or rolled over in the next 12 months. Although the sovereign debt has been kept low by various measures, the Treasury has indirect exposure to borrowing by private-sector companies. This financing for Turkey’s large infrastructure projects has been mainly provided by banking consortia with guarantees from the Treasury relating to assured revenue. Unless there is fresh inflow of foreign currency into the Turkish economy, it is approaching a concrete wall which may force it to turn to the International Monetary Fund for help.

The finance minister and Erdogan’s son-in-law Berat Albayrak told investors on Wednesday that the country’s foreign exchange reserves remained more than adequate, according to a Reuters report.

Looking for a scapegoat for the lira’s latest slide, according to analysts, the country’s banking regulator took action against three banks on Thursday.

However, it isn’t yet clear why the three banks were unable to meet these liabilities. It is worth noting that a similar situation happened in March last year when the Turkish government instructed banks not to lend Turkish lira to foreign banks to fulfill similar obligations.

“Before the coronavirus crisis, the country was already in a crisis,” said a separate Turkish economist who also declined to be named. “Since 2013 the currency has consistently been falling. That means it is a structural problem. Decisions are being made based on politics not based on economic rationale,” the economists said.

Turkey’s actions managed to momentarily stem the fall of the lira against dollars, with the currency changing hands at 7.1059 against the dollar on Friday, at last check. However, the underlying reason is the increasing difficulty of the Turkish central bank to support the currency by selling bucks.

Turkey has been in contact with the Federal Reserve about a dollar swap line, according to reports. However, Richmond Fed President Thomas Barkin said the Fed has swap lines with countries that have a relationship of “mutual trust,” during a Howard County Chamber of Commerce online forum, Reuters reported Wednesday. He did say that other countries, including Turkey, have access to broader overnight repo facilities, but implied that a bilateral arrangement was unlikely.

Unless Turkey manages to find fresh resources from abroad, many are betting that lira’s depreciation continues apace.

PrevPreviousOutside the Box: Why your best bets for investment income will evaporate in the post-coronavirus market
NextThe same number of people could die from ‘deaths of despair’ as have already died in the U.S. from coronavirus, new study findsNext