Dispatches from a Pandemic: Thanks to coronavirus, my daughter now has America’s worst teacher

Circle time is not for the weak.

Turns out, you can’t really make a circle with three people, but that’s the size of my family. Plus, we already know what the other people in our circle/triangle have been doing for the past two weeks because, well, we’ve been self-quarantined and spending nearly every minute of every day together. Sharing? That’s all we do: share snacks, hopes, dreams and art supplies for the 17 crafts my daughter, Satya, and I make, usually before lunch.

With remote schooling in session in many U.S. communities due to the rapid spread of the coronavirus, my husband and I are adding a new title to our resumes: teacher.

In addition to experiencing the anxiety and uncertainty of the global pandemic, parents and caregivers have been tasked with the impossible role of educator, forced to squeeze more out of already overwhelming days. While learning to do their own jobs remotely, or still going to work at grocery stores, banks, hospitals and restaurants, they are also learning middle-school math and high-school English, navigating Google Classroom GOOG, +3.25% GOOGL, +3.25%  for US:GOOGL the first time and sorting through assigned work from teachers.

For Supriya Kelkar, an author and Michigan mother of three — a second grader, a kindergartner and a preschooler in Montessori — navigating telelearning has been a challenge. Her husband, a radiologist, is still going to work. The Montessori school has been sending home packets of work, Kelkar said, while her eldest child’s school has provided a loose schedule, a list of websites to consult and a daily Zoom ZM, -0.54%  call in which the kids and teacher can all see one another.

Here at the Singh School for Wine, Witchcraft and Wizardry — that’s our official homeschool name — we’ve been doing some yelling ourselves.

“My kids are fighting and losing their minds right now.I write this detailed schedule out every morning, they follow it for two hours, and then it’s a free-for-all where they are fighting with each other and I’m hiding in the pantry shoving cookies in my face,” laughed Kelkar, whose new book, “American as Paneer Pie,” comes out May 12.“I have gone through five boxes of Thin Mints myself, and I’m out of Thin Mints now and I’m very upset about it. That’s been my quarantine.” 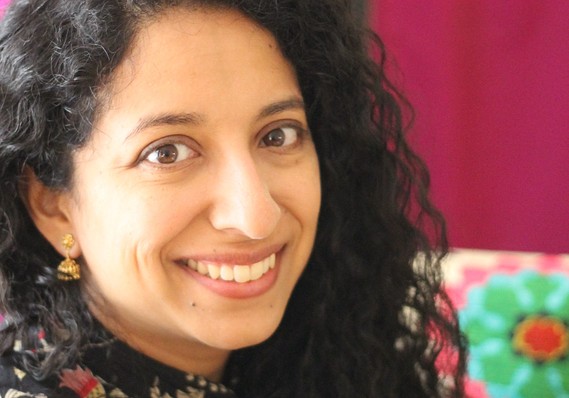 ‘My kids are fighting and losing their minds right now,’ said author Supriya Kelkar, a mother of three.

Kelkar has been improvising with assignments and routines, giving her kids creative outlets for some of their “school time,” in addition to worksheets and reading time.

“We have workbooks and we are trying to get through, but it usually falls apart after two hours,” she said. “Today they wrote a play and all my lines are screaming, ‘Do your homework!’”

Here at the Singh School for Wine, Witchcraft and Wizardry — that’s our official homeschool name — we’ve been doing some yelling ourselves. “I’m on a call!” is a popular one, as is “I need a snack,” “Is it time for Mo Willems?” and “IT’S QUIET TIME. WHY ARE YOU NOT BEING QUIET?” I know that Satya’s teachers — Molly and Lex, those heroes — never yell, because she reminds me every day. “That’s not what Molly says” is usually followed by, “That’s not how Lex does it.”

Like Kelkar, my husband, Agan, and I are trying to follow some kind of schedule. But between my job, his job, everyone’s emotions around COVID-19, friends who are sick and family members around the world in lockdown, it’s hard to wrap our collective head around a math worksheet. Most of these days, we’re just trying to hang on to what we have, give Satya and ourselves a sense of happiness and joy amidst the uncertainty, and just keep it all moving forward.

Satya Singh in her ‘homeschool’ setup.

The struggle is real for teachers, too. Guy Ramsbottom, a father of four and ENL (English as a new language) teacher in Queens, says the move to online learning has been an adjustment. His students are mostly kids who have come from other countries and need help with their English. Ramsbottom said he records 15-minute videos for his students, uploads them to Google Classroom, and then creates worksheets based on those videos.

‘Teach what you feel comfortable teaching, then just be a parent. It’s OK to say, “I don’t know, but let’s look this up together,” find it on the internet or check back in their notes.’

However, when it comes to his own kids, Owen, 8, Jack, 5, Isla, 4 and Penelope, 3, Ramsbottom said he feels guilty his second grader isn’t getting all his work done — though, he added, he has been enjoying teaching his sons to cook. He also acknowledges that parents are now in the position of facilitating learning for their kids, often with concepts (like common-core math) that may be unfamiliar to them.

“Teach what you feel comfortable teaching, then just be a parent. It’s OK to say, ‘I don’t know, but let’s look this up together,’ find it on the internet or check back in their notes,” he said. “The key to teaching is being honest and being calm. Tension and stress in education only goes so far before the kid snaps.”

Leah Mermelstein, a New Jersey-based literacy consultant and founder of the consultancy Read-Write-Connect, Inc., has used the last two weeks to launch a Facebook FB, +5.84%  Live show called “Write Your Brains Out” with her 7-year-old daughter, Ariana, a first grader. The duo runs free, interactive writing workshops for other families stuck at home. Mermelstein, a single mother by choice, said she has also used this time to reconnect with her daughter — doing some of the recommended homework, but not all of it.

“I’ve told my daughter’s teacher this, but I’m not doing the homework,” she said. “I’m pulling from it, but I feel like it’s just not business as usual. It’s a time to pivot and think about what makes sense, and to think of this as a different kind of learning opportunity.”

When Ariana expressed fear over going outside last week because she didn’t understand the concept of six feet, the social-distancing metric recommended by public-health experts, Mermelstein used that as an opportunity for a timely and comforting math lesson. She has also been using Zoom for Ariana to chat with kids in London as part of her social-studies lesson, and video conferencing with Mermelstein’s friends, like a TV producer in California who needed some kids for feedback on a project.

“The Facebook Live show is a way for us to have a co-project, because when is that ever going to happen?” Mermelstein said. “I want her to look back and say, ‘Wow, I had six months to hang out with my mom!’ This isn’t the time to stress kids out.” She will also be sharing tips for caregivers to support at-home learning on the Benchmark Education Company Facebook page.

Leah Mermelstein and her daughter, Ariana.

The not-stressing-out part has been hard. I worry that because she’s home with me, Satya won’t be a strong reader, or that she’ll continue to mix up her Bs and Ds because I don’t know all the tricks her teachers do. I’m worried that this time at home with us, though fun and filled with dance parties and ridiculous projects, will set her back academically in what I always believed was a pivotal year of schooling. Mostly, I’m worried about how isolating it all feels, for her and for us.

So we’re focusing on the stuff we can do: lame crafts, making signs for local businesses that have had to shut their doors, drawing pictures of people we miss and then mailing them out. We’ve started our own Facebook Live story time and chit-chat show, a hilarious display of community that keeps us connected with friends and even lets us make some new ones. We’re doing our best, even though it looks and feels messy.

‘Providing for our family is a higher priority in times of crisis, so when we have to choose, just remember, our children will continue to learn. Perhaps not on the same timeline than if they had stayed in school this year, but they will learn.’

“The first thing I want parents to remember is that most of us are not trained teachers,” said Emily W. King, a licensed psychologist from Raleigh, N.C. A recent Instagram post by King, reminding parents about choosing connection, went viral — appearing on parenting sites, social media and even “Today” show anchor Hoda Kotb’s Instagram account.

“We may be faced at a certain moment to choose whether to meet with a client online for work to maintain our career, and our income, rather than helping with sixth-grade math. It’s OK to choose your job,” King said. “In fact, we need to choose our job. Providing for our family is a higher priority in times of crisis, so when we have to choose, just remember, our children will continue to learn. Perhaps not on the same timeline than if they had stayed in school this year, but they will learn.”

King, a mother of twin 12-year-old boys and a 6-year-old boy, wrote her post three weeks ago in the early stages of homeschooling, while her husband was working from home and she was adjusting her client schedule to accommodate the new normal. She was surprised how far the post traveled, but believes that choosing connection — a game over arguing over an assignment, or teaching kids how to do laundry instead of feeling frustrated they aren’t helping — will help.

That includes screen time. Screen time can make parents nervous due to its potential for overuse, she said, but it can be meaningful when used to connect kids with classmates, family members or teammates whom they miss.

“Connecting online with anyone a child is missing is an impactful connection. Even playing virtual video games with friends from school while chatting on FaceTime has social value these days,” King said. “We are wired for connection, and when we feel isolated, this can lead to sadness. We need to be mindful of getting as much social interaction as we are craving, and allowing our children to do the same.”