Economic Outlook: Here’s how to track the mounting damage to the U.S. economy from the coronavirus 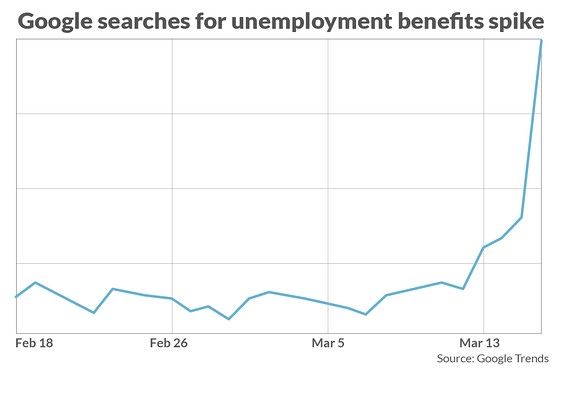 Millions of people losing their jobs? Unemployment spiking to Great Recession levels or higher? The mounting devastation to the economy from the coronavirus is about to become starkly visible.

New jobless claims and a slew of other economic reports over the next several weeks will provide a fuller picture of the impact of the coronavirus pandemic on American life and work.

States around the country are reporting a massive surge in the number of people applying for jobless benefits. The incoming evidence such as a spike in Google searches suggests initial jobless claims could soon balloon to unprecedented levels.

A Goldman Sachs economist, for example, estimates new applications for unemployment benefits could zoom to more than 2 million in just one week when the latest report comes out next Thursday.

If the numbers keep soaring, it won’t be long before the number of people receiving unemployment benefits blows past a record peak of 6.6 million in 2009.

Read: The economy is in for tough times. Here’s one’ roadmap for recovery

The early evidence gives a hint of what is to come.

A survey of manufacturers in the Philadelphia region, meanwhile, plunged to the lowest level in almost eight years. That’s just the tip of the iceberg.

The end of March will reveal how Americans have reacted to the unprecedented disruptions in their lives through reports on consumer sentiment (March 27) and consumer confidence (March 31). A daily survey by Morning Consult shows that confidence is plunging.

Then in early April comes a big one: The monthly employment report.

It’s possible the U.S. could post the first decline in jobs since 2010 and break a string of 113 straight months of increases, but a negative reading is more likely in April than in March. The government’s survey for March was mostly completed in the early part of the month before the coronavirus crisis exploded.

How bad it gets will depend on how quickly the federal government moves to supply aid to the thousands of businesses and millions of workers that have been harmed by large parts of the economy shutting down.

PrevPreviousWeekend Sip: A canned cocktail for when you’re cooped up at home during the coronavirus pandemic
NextOutside the Box: Why retirees should be wary of rising inflationNext