A new report from the Centers for Disease Control and Prevention showed that life expectancy at birth increased for the first time in four years. For decades, life expectancy had been on an upswing, rising a few months every year. But from 2014 to 2017, it actually fell, as deaths due to overdoses and suicides soared.

Although suicides continued to remain high, declines in deaths from drug overdoses and cancer led to an overall improvement in 2018.

While the news is definitely good, life expectancy at birth is not a number I usually look at. Many critics of Social Security, however, often cite this statistic to demonstrate how much the beneficiary base has increased since the program started in 1940. In 1940, life expectancy at birth was 61.4 for males and 65.7 for females, and the age for full retirement benefits was 65.

These statistics make it sound like people would pay in a lifetime of contributions but never collect benefits. 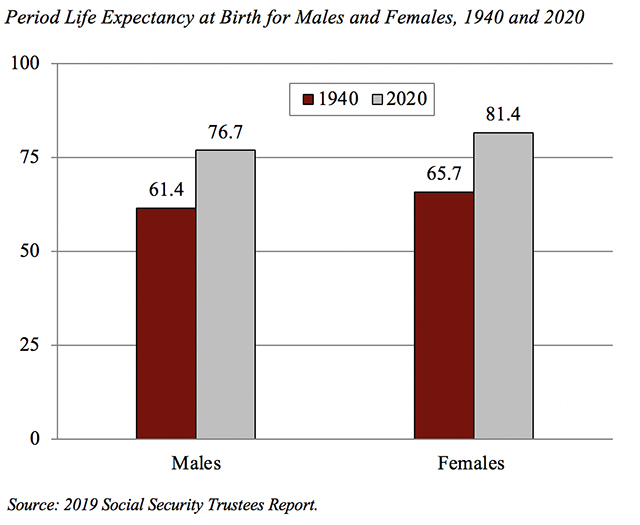 That characterization, however, is extremely misleading. The low life expectancy at birth in the early decades of the 20th century was due mainly to high infant mortality. And someone who died as a child would never pay into or collect benefits from Social Security. The more relevant question is the probability of living to 65 once having attained adulthood. And, even in 1940, 54% of males and 61% of females could expect to live to 65 if they survived to 21. Indeed, the population age 65+ consisted of about 9 million individuals in 1940. Today, almost all adults live to 65.

The more relevant issue for Social Security is the life expectancy of those reaching 65 — that is, the period over which the average person could expect to receive benefits. As shown in the figure below, life expectancy at 65 has increased from 11.9 years for males and 13.4 years for females in 1940 to 18.2 and 20.7, respectively — a gain of roughly seven years.

Increases in life expectancy at 65 are one reason that costs continue to increase going forward even once the ratio of beneficiaries to workers stabilizes.

But the main message here is that life expectancy at birth is rarely — if ever — a helpful concept in Social Security discussions.

PrevPreviousNext Avenue: Save time and money when you travel with these tips from the experts
NextThe Margin: Shaq to his 15 million followers: Who wants to buy my California mansion?Next