Nearly 70% of the fresh produce sold in the U.S. contains residues of legal though potentially harmful chemical pesticides, and a popular snack for children is another big offender.

Among the top choices to limit exposure to pesticides? Avocados, asparagus and honeydew melon.

The analysis comes from the Environmental Working Group. Each year since 2004 it has ranked its Dirty Dozen and Clean Fifteen lists and combines them as a shopper’s guide for consumers. The “dirtiest” of all is not a fresh fruit or vegetable, but a dried one — raisins. Raisins weren’t ranked on the fresh lists but their surprising results caught the attention of EWG.

Toxicologists and other researchers at EWG compare the pesticide contamination of 47 popular conventional — meaning not farmed organically — fruits and vegetables. The review is based on the results of tests by the USDA and the Food and Drug Administration of more than 43,000 samples of produce. 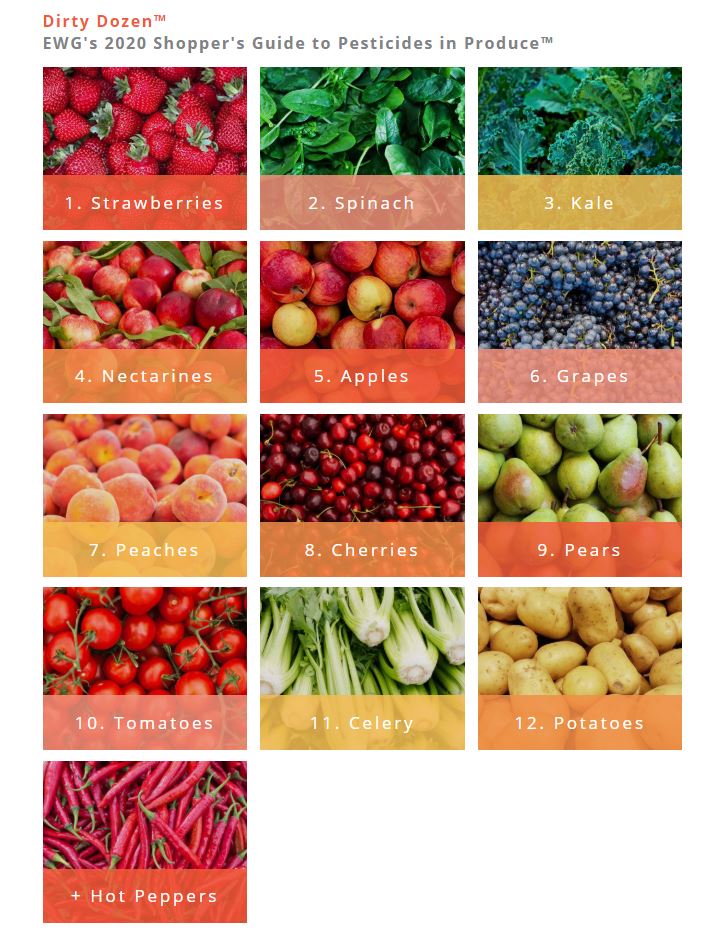 Most pesticide residues the agency finds fall within government-mandated restrictions, but advocacy groups such as EWG argue “legal does not mean safe.” Before conducting its tests, USDA washes, scrubs and peels fruits and vegetables as consumers would.

Thomas Galligan, Ph.D, a toxicologist with EWG said researchers continue to study why raisins contained higher traces of pesticides than the grapes they’re dried from, though grapes ranked on the list this year. Read more of his analysis.

Children under the age of 15 eat a total of about 208 million pounds of raisins each year, or about half of the raisins consumed in the U.S., according to Zion Market Research. The average American consumed about 1.25 pounds of raisins in 2017, the latest year for which the USDA has information. Zion’s industry analysis shows that slightly less than two-thirds of raisins are consumed as ingredients in other foods, with the rest eaten as a stand-alone snack.

Read: Want to know the best diet for your body?DNA tests may soon tell you — down to the variety of lettuce you should be eating

“Infants, babies and young children are exquisitely vulnerable to even low levels of pesticide exposure, so it’s important parents and caregivers take steps to safeguard children from these chemicals while also providing them diets rich in healthy fruits and vegetables,” said Dr. Philip Landrigan, a pediatrician and epidemiologist who’s director of the Program in Global Public Health and the Common Good in the Schiller Institute for Integrated Science and Society at Boston College.

“For many Americans, choosing an all-organic diet is not possible, so [pesticide guides] can help give consumers the tools to provide their families with a mix of both conventional and organic fruits and veggies without the pesticide punch,” he said.

Producers generally use pesticides to improve crop yield, which can hold down retail prices. The findings also show that even produce labeled organic can show traces of pesticide.

The EWG group highlighted two chemicals in particular. One is neurotoxic insecticide chlorpyrifos, which some research has shown can harm the brain and nervous system in children at even low levels. The chemcial was detected on 5%, or 34 out of 670 samples, of conventional raisins, and 6%, or five out of 86, of organic raisin samples.

California, where the majority of the U.S. raisin supply is produced, recently banned all uses of chlorpyrifos because of the risks it poses to both children and farm workers. That regulatory change was not carried through to the federal level, however.

The second chemical of note is neonicotinoids, which the USDA’s tests detected on almost one-fifth of fruits and vegetables. Neonics are the fastest growing class of insecticides, “despite a decade of research making it clear that they are highly toxic to honeybees and other pollinator species,” EWG researchers said. Some studies on human health also suggest that exposure to neonics may be harmful to the developing fetus and children, they said.

Residues of at least one of three neonicotinoid pesticides banned in the European Union — imidacloprid, clothianidin and thiamethoxam — were found on more than half the U.S. samples of potatoes, spinach and lettuce tested. At least one of these neonics was also found on more than one-fourth of the samples of U.S. cherries, watermelon and strawberries.

Experts at EWG stressed that maintaining fruits and vegetables in daily diets is the most important goal. Sometimes budget and availability limit shopping for organic produce.

“Although we believe consumers should be concerned about pesticide residues on the food they eat, the health benefits of a diet rich in fruits and vegetables outweigh the risks of pesticide exposure,” said Alexis Temkin, PhD, a toxicologist with EWG. “With the Shopper’s Guide, consumers don’t have to choose between pesticides and a healthy diet.”

EWG added specific guidance to its report as consumers respond to the coronavirus pandemic.

It is important to know that there is no evidence people can be exposed to the coronavirus through food, experts say. The spread pattern is quite different from foodborne pathogens like Salmonella and E.coli. That is why, even though the risks of COVID-19 are serious, consumers should continue eating plenty of healthy fruits and vegetables while in quarantine at home, the group said.

PrevPreviousEquifax says it will work with lenders, creditors to help reduce the impact of the coronavirus crisis on U.S. credit reports
NextNext Avenue: Laid off? 6 smart tips on how to bounce backNext