Key Words: ‘I’ve been a labor economist for a very long time — and have never seen anything like this.’ Jobless claims rise nearly 1,500% in 3 weeks

Initial unemployment claims jumped to 3.28 million last week from 211,000 three weeks ago and 282,000 two weeks ago, the Labor Department said Thursday. Businesses across the country have closed in an effort to stop the spread of the novel coronavirus, and millions of Americans have been advised to stay home and practice “social distancing.”

That’s nearly a 1500% increase in three weeks, said Heidi Shierholz, a senior economist and director of policy at the progressive Economic Policy Institute, a Washington, D.C.-based think tank. “I have been a labor economist for a very long time and I have never seen anything like this. This is a case where a picture is worth a thousand words.”

The $2 trillion stimulus package, passed by the Senate late Wednesday, will help the U.S. through this “unprecedented crisis,” Shierholz added. “This package would represent a very important step in the U.S. response to the coronavirus pandemic.” 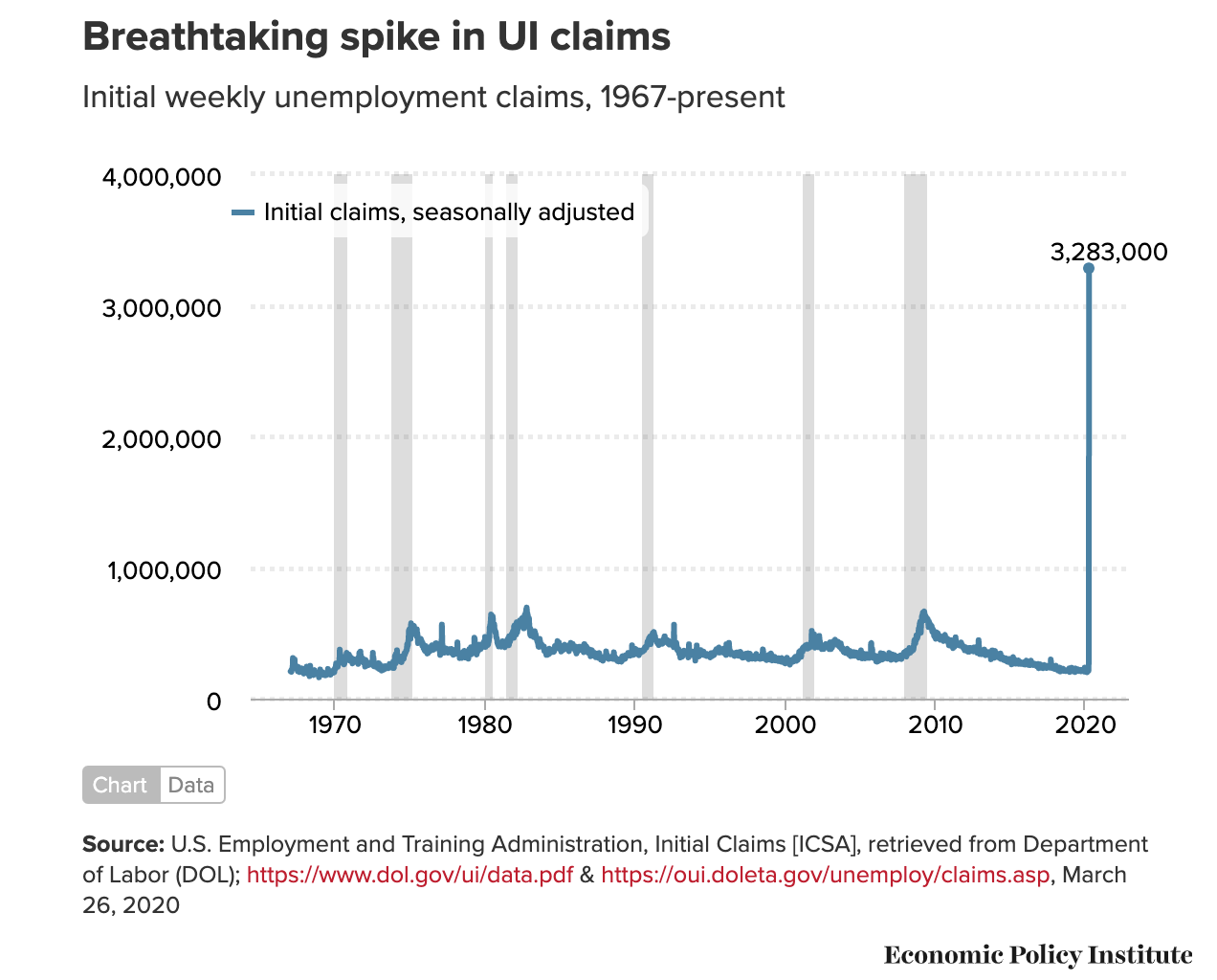 The actual or unadjusted number of new claims, meanwhile, was 2.9 million, according to new figures released Thursday by the Labor Department. Experts say the travel, retail, restaurant and hospitality industries, among others, have been particularly badly hit.

“Government labor market data that really show — in a breathtaking manner — the impact the coronavirus shock is having on the labor market,” Shierholz said. (Economists polled by MarketWatch had forecast a 2.5 million increase.)

“The figure shows initial unemployment insurance claims over the last 50-plus years,” she said. “The spike at the end shows what unprecedented territory we are in right now. Furthermore, this is just the tip of the iceberg. We estimate that by the summer, 14 million workers will lose their jobs due to the coronavirus shock, with significant losses in every state.”

‘I have been a labor economist for a very long time and I have never seen anything like this. This is a case where a picture is worth a thousand words.’

The $2 trillion stimulus package includes a $250 billion expansion of unemployment insurance, including an increase in the level of benefits and the creation of a Pandemic Unemployment Assistance (PUA) program which would be available to many workers who are not eligible for regular unemployment insurance (independent contractors, for example).

The $2 trillion stimulus bill will pay workers $600 a week on top of whatever sum they receive in their state-level unemployment claim for a period of up to four months, according to provisions in the Coronavirus Aid, Relief, and Economic Security (CARES) Act.

Coronavirus had infected at least 69,197 people in the U.S. as of Thursday morning and killed at least 1,046 people, according to Johns Hopkins University’s Center for Systems Science and Engineering. New York State accounts for roughly 40% of the national total, and 14% of global cases. Worldwide, there were 487,648 confirmed cases of the virus and 22,030 reported deaths.

PrevPreviousThe Margin: ‘We needed each other in this crazy mess.’ Is it a good time to rescue a dog during the coronavirus lockdown?
NextOutside the Box: Your spouse may be driving you crazy right now, but this is why you shouldn’t do anything impulsiveNext