Mark Hulbert: What is a retiree’s most important investment decision?

On what should you spend more time in devising your retirement portfolio:

The answer from many investors and financial planners is the latter, on the theory that the factors that affect the former (age, risk tolerance, etc.) don’t change very often or by much when they do. Security selection, in the contrast, is where the greatest value gets added.

A new study, forthcoming in the academic journal Critical Finance Review, should cause you to reconsider. The study is entitled “Carhart (1997) Mutual Fund Performance Persistence Disappears Out of Sample.” Its authors are James Choi, a professor of finance at Yale University, and Kevin Zhao, a Ph.D. candidate at that institution. (Full disclosure: Prof. Choi was an intern in my office in 1996.)

The “Carhart (1997)” referred to in the title is a seminal study conducted in the 1990s by Mark Carhart, entitled “On Persistence in Mutual Fund Performance.” Carhart at the time was a finance professor at the University of Southern California; he subsequently became co-chief investment officer at the Quantitative Investment Strategies Group at Goldman Sachs Asset Management, and after that, chief investment officer at Kepos Capital. Carhart found that the funds with the best returns in the previous calendar year produced better returns in the subsequent year than the previous year’s worst performers.

To be sure, Carhart did not attribute this persistence to superior ability on the part of mutual fund managers. He argued that it was instead caused by the tendency of one year’s best-performing stocks to be above-average performers in the next year as well. This nuance was lost on many financial planners, however, who cared less about why “hot hands” persist in the mutual fund arena and more on the mere fact that they exist.

Choi’s and Zhao’s new research calls into question even this un-nuanced interpretation of Carhart’s findings. They found that almost all of the statistical significance in Carhart’s study derives from data up through the late 1970s. Over the nearly four decades since then, in contrast, there has not been a statistically significant difference in the risk-adjusted performances of the previous year’s top performing mutual funds and the previous year’s worst.

To put that another way, the historical data suggesting year-to-year persistence in mutual fund rankings is largely an artifact of the period prior to the 1980s.

This is illustrated in the accompanying chart. It shows the difference in the trailing 10-year returns of two hypothetical portfolios: The first contained the 10% of U.S. equity mutual funds with the best returns in the prior calendar year, while the second contained the decile of worst funds. The blue shading shows those differences that are significant at the 95% confidence level that statisticians often use when determining if a result is more than just random luck. 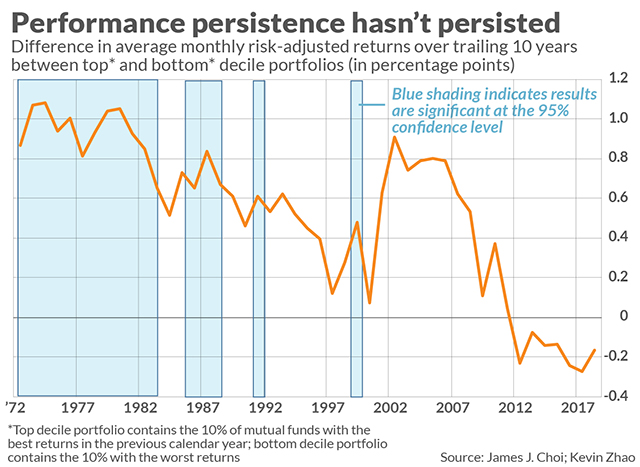 Notice that, after the 1970s, there have been just a handful of years for which there is statistical significance for the trailing 10-year difference between the top and bottom decile portfolios. And since the turn of the century there has been no ten-year period with such significance. Furthermore, when the researchers expanded their focus to the entire period since 1980, rather than to ten-year intervals along the way, they found no statistically significant difference.

This late-1970s inflexion point is decades earlier than what many analysts and investors had previously assumed—that a strategy of betting on the previous year’s winners had only stopped working in the last decade. To the extent that had been the case, one could plausibly argue that this only a temporary state of affairs.

But not if the approach hasn’t worked for four decades.

There are several investment implications of this new research. The most important is that, because there is far less performance persistence in the mutual fund arena than previously thought, energies spent on selecting a mutual fund are likely a waste of time. Once you have decided how much to allocate to a given asset class, then you should invest that allocation in a low-cost index fund.

Some of my clients are disappointed when they hear advice like this, since it means they need to give up the dream of beating the market. But I like to reframe the issue differently. Results of study such as this one liberate us from poring over the year-to-year performance rankings—enabling us instead to focus on what’s really important.