NerdWallet: This couple paid off $179,000 in less than 4 years and rebounded from bankruptcy 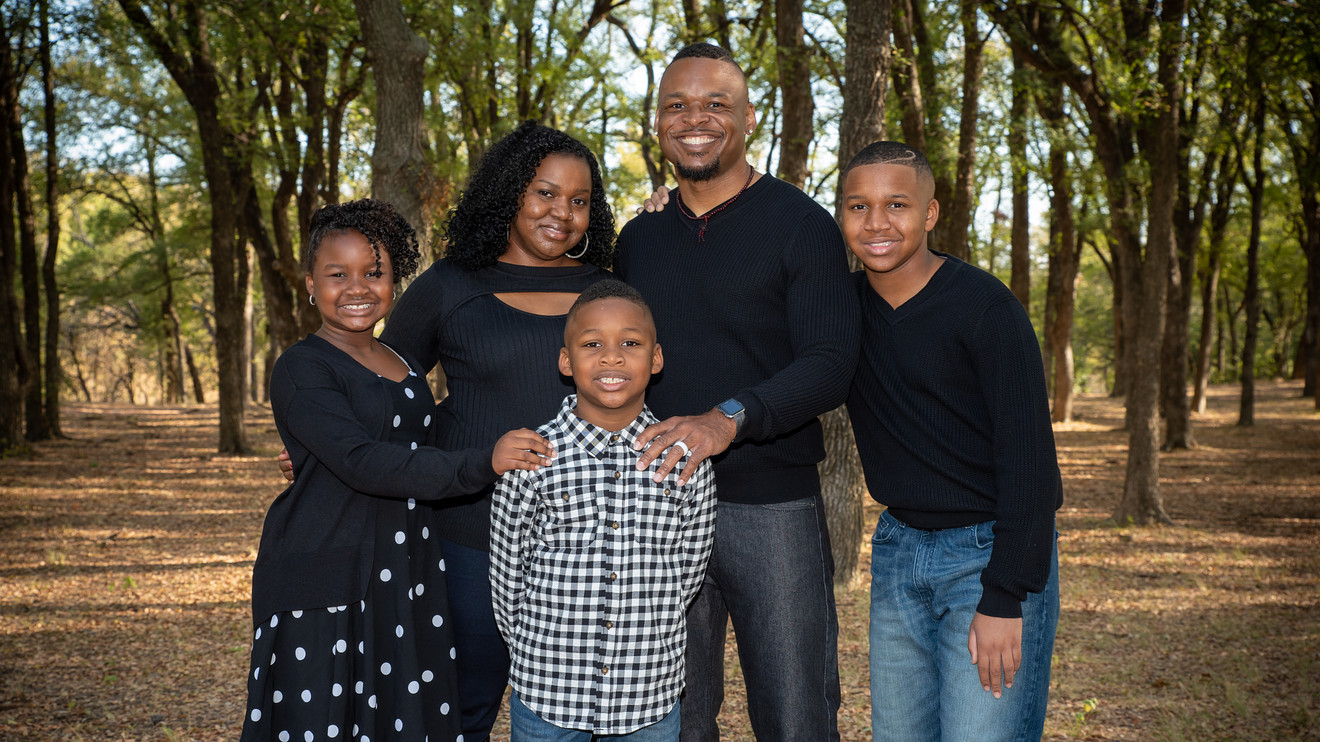 In this series, NerdWallet interviews people who have triumphed over debt. Responses have been edited for length and clarity.

Rashad Muhammad, a school principal and part-time real-estate agent, started racking up debt while attending Bethune-Cookman University in Daytona, Florida. That’s where he met his wife, Nirvanna, who had her own financial struggles.

Although he had a football scholarship, injuries led Muhammad to take out student loans during his junior year. After graduating, he took out more loans to pursue a master’s degree in educational administration.

“ We had to tell the judge our total debt out loud and I remember hearing someone chuckle in the background. It was eye-opening and humiliating. ”

The couple merged finances after getting married in 2005, combining their student loans, credit card debt and car loans, and later moved to Texas in 2007.

As their family started to grow, their debt grew, too — at one point reaching $250,000. Their debt weighed heavily on Muhammad, especially when Nirvanna temporarily stopped working as a teacher in 2011 to have their second child.

Feeling desperate, the couple decided to file for Chapter 7 bankruptcy in 2011. [Editor’s note: In some cases, bankruptcy is the best option for handling overwhelming debt. If your non-mortgage debt is more than 40% of your income or would take more than five years to pay off, consult with a bankruptcy attorney.]

The process eliminated their unsecured credit card debt, but it didn’t dramatically alter their finances — or their spending habits — overnight. They still had student loans. They also took out new car loans to replace the cars they lost during bankruptcy. In the midst of having their third child in 2012, they amassed more credit card debt. By the spring of 2013, they owed $179,000.

Over nearly four years, the couple took steps and made sacrifices to pay it all off. By January 2017, they were officially debt-free.

Today they live comfortably in Fort Worth, Texas, with their three children, ages 7, 9 and 13, and are able to afford vacations and save for retirement.

Also read: This 34-year-old paid off $81,000 in student debt, but not before it took a toll on her mental health

Muhammad spoke with NerdWallet about recovering from bankruptcy, what he learned about tackling debt as a couple and which financial goals they’re prioritizing now.

What was your total debt before you declared bankruptcy and when you started your repayment journey? What is it today?

How did you originally end up in debt?

I went to college on a football scholarship and knew nothing about finance at the time. I didn’t know anything about saving and had been living paycheck to paycheck my entire life, which I thought was normal. My wife also had student loans and credit card debt.

As a football player, I wasn’t allowed to have a part-time job because it was considered illegal to work while playing football. After I got injured during my junior year, I started taking on student loans. I also got a master’s degree after graduating, so I went up to $59,000 in student debt.

What made you two decide to declare bankruptcy and what was the process like?

My wife had to take off a few months of work when we had our daughter in 2011, and the debt was overwhelming. When this second baby came, we were making decent money, but all the money was going back to our debt. We felt like we were drowning and had no way out. We had thought about doing it [declaring bankruptcy] for a year, but it was so taboo.

Also see: Why are so many people over 55 going bankrupt?

We had to go to a bankruptcy attorney, who filed a petition, and then we had a day in court. It was a day I’ll never forget. Our son was in preschool at the time, and our daughter was still a baby. We had to tell the judge our total debt out loud and I remember hearing someone chuckle in the background. It was eye-opening and humiliating.

How did bankruptcy affect your finances?

We lost our house and cars. We thought it could provide us some relief to move forward, but it didn’t solve all of our issues. You still have to rebound and recuperate. While bankruptcy eliminated our unsecured debt, we still had $125,000 in student loans and had to get two more cars — $22,000 in car loans — since we don’t work near each other. We also had a third child in 2012 and ended up running our credit card back up to $32,000.

What steps did you take to pay off the rest of your debt?

When we were on one income, we cashed out some of my wife’s retirement to help pay off the student loans. [Editor’s note: While it’s tempting to halt retirement savings or pull retirement funds out to speed your debt payoff, NerdWallet recommends against it. Amassing enough for retirement depends heavily on interest and returns compounding over many years.]

We used the debt snowball method. None of our interest rates were astronomical, so we knocked out the smaller loans first. Seeing two or three loans disappear quickly was powerful. We also completed Financial Peace University [Dave Ramsey’s nine-lesson class] in 2014. Any tax returns went to paying off debt.

We cut back on vacationing — only going to Atlanta and Florida to see family — and stopped eating out as much. We also drove older cars. For example, we got a 2003 Honda Pilot, which we kept for eight years. We didn’t care what people thought about what we drove.

What kept you motivated during your debt payoff journey?

We knew we wanted to be debt-free, but the “why” was the real motivation. Looking at the end goal — to start saving for retirement — helped a lot. I couldn’t really dig deep into paying off debt and save for retirement at the same time, and it ate at me knowing that I was missing out on opportunities for compound interest. We knew we’d be able to save more once we were debt-free.

“ We will teach our kids to only buy things they have money to buy. For their birthdays, we put money in their college funds. ”

What have you learned about navigating debt as a couple?

My wife is the free spirit and I am the nerd; I like spreadsheets and she hates them. We had to understand each other’s strengths and weaknesses.

Aside from that, it was so important for us to combine finances and make sure we both had equal say. I’ve always made 60% to 70% of our income, but it’s our money.

Read: How wiping out $1.5 trillion in student debt would boost the economy

We will teach our kids to only buy things they have money to buy. For their birthdays, we put money in their college funds. We went on a cruise recently, and our kids were blown away. They’ll remember the cruise when they’re older, but they won’t remember a $15 toy. Experiences, not things, make us happy.

Why did you decide to get a house during your debt payoff period?

When we lost our home from filing for bankruptcy, we knew we wanted to get another one, but we wanted to get it the right way. That meant finding a home we could afford and getting a loan that fit our needs. We bought our home in May 2015, and paused our debt payoff — only paying the minimum — during this period [between October 2014 and May 2015]. We went through Neighborhood Assistance Corporation of America [a homeowner assistance program], which didn’t require a down payment and had low interest rates. We went with a 15-year mortgage.

We didn’t wait until we were debt-free to buy a house. If we had, we would have bought at the top of the market and would probably have paid 20% more for the same house. We have a little more than 10 years to pay it off, but there’s no rush because the interest rate is low.

What would you have done differently?

I would have gone to community college and worked for two years while staying at home. If I could talk to 18-year-old me, I wouldn’t have applied for that first credit card without knowing anything about money — that set me on a road of debt, and the most important piece of building wealth is staying out of debt. I remember buying a set of $49 cellphones that didn’t even work.

What’s your income, and what are your financial goals now that you and your wife are debt-free?

My wife and I are both educators, and we’ve gotten 3% raises almost every year. Our joint salary is around $161,000 now. I also earned around $20,000 from real estate last year.

We want to retire at the ages of 52 and 54, respectively. We’re holding out until we get our pensions. I’ve been motivated by the FIRE [“financial independence, retire early”] movement.

We’re also going to Cabo for our 15th anniversary and have another cruise booked for the entire family for 2021. We couldn’t do these trips before.

What’s an unexpected benefit of being debt-free?

We were at dinner one day and saw a single mom eating with four kids. My wife and I looked at each other and it clicked — we told the server we’d cover her bill and tip. In the past when we had debt, we’d feel guilty doing something like that. How could we help people when we could barely help ourselves? Doing random acts of kindness wasn’t possible before, but it feels so good to be able to do that now.

How to ditch your own debt

If the Muhammads’ story motivates you to tackle your own debt, here are a few things to consider.

Valerie Lai is a writer at NerdWallet. Email: vlai@nerdwallet.com.

PrevPreviousKelley Blue Book: These 3 EVs are the lowest cost to own over 5 years
NextHow can I protect my 401(k) from a coronavirus-driven market downturn?Next