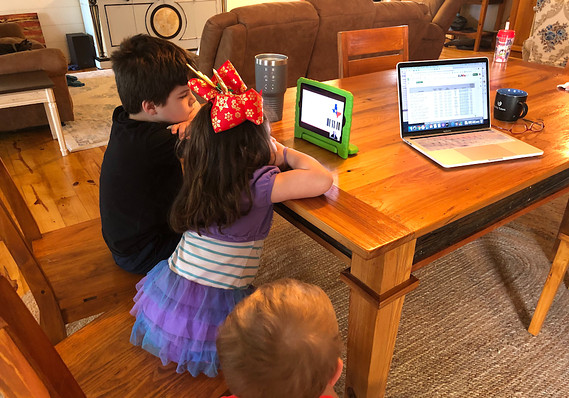 As more Americans practice social distancing to contain the spread of COVID-19, the disease caused by the coronavirus, layoffs are mounting at businesses that rely on foot traffic, such as restaurants and brick-and-mortar retail.

The dire economic outlook could be leading some to consider “gig” jobs, or temporary jobs, to help them get by until they land a permanent full-time role.

In 2008, when layoffs were far and wide, many people turned to the gig economy to pay the bills. Now the gig economy is back in the spotlight. But unlike 2008, laid-off workers need to take into account whether or not the extra money from certain gigs is worth potentially compromising their health. Many gig jobs — like driving for a ride-hailing app — involve close interaction with other people. But earning extra money doesn’t necessarily have to mean putting yourself at risk of contracting the coronavirus.

Data suggests that people turn to gig work when they’re in a financial crunch: income typically drops by as much as 10% in the 10 weeks leading up to a when a person takes a gig job, according to an October 2019 report published by the JPMorgan Chase Institute JPM, +3.73%.

Pay in the gig economy can be paltry: Taking into account fees as well as other expenses incurred, Uber UBER, -0.76%  drivers typically end up earning just $9.21 an hour, a different report published in 2018 by Lawrence Mishel, a distinguished fellow at the Economic Policy Institute, a left-leaning nonprofit think tank based in Washington, D.C. found.

These days, rideshare drivers are shifting to becoming food delivery drivers on platforms like Uber Eats, Grubhub GRUB, +3.17%  and Instacart. These drivers are allowed to travel freely through regions that have shelter-in-place orders because their services are deemed essential. Uber has been sending alert messages to its drivers encouraging them transition to food couriers, a spokeswoman said. “As of Tuesday about 15% of drivers who received the message — and had never delivered an Uber Eats order — made their first delivery,” Uber said.

As people are stuck at home and stocking up on groceries instead of going out to eat, Instacart is looking bring on more than 300,000 new personal shoppers over the next three months.

Many of these apps offer contactless delivery to help cut down on drivers’ chances of spreading the coronavirus. But there are also some gig jobs that can be performed remotely.

Here are some examples:

Virtual School Day is a program that provides daily lessons to children K-12 free of charge. Teachers and people with a background in education are paid as much as $40 an hour for teaching Virtual School Day classes. The service has a “higher bar” for Virtual School Day teachers, said Brian Galvin, chief academic officer for Varsity Tutors.

“They have to propose a range of lesson plans and how to make it interactive for 100+ students,” he said. Teachers have been jumping on the opportunity to teach some of their favorite lessons to students across the country with different backgrounds than their own students, he said.

“Classroom teachers have been saying ‘I have these awesome lessons I didn’t get to cover this year can I bring them to Virtual School Day?’” Galvin was pleasantly surprised both by how many children attend virtual school classes and by how many people with education backgrounds have become Virtual School Day teachers.

“It was really heartwarming when a parent asked a first-grade Spanish teacher if she could do another virtual high-five since her child missed it,” he said. One benefit of online learning: Students who might otherwise refrain from participating in class are finding it a lot less nerve-racking, he said.

In addition to Virtual School Day, parents have also been paying for one-on-one online tutoring sessions. The hourly pay tutors earn varies based on subject and expertise but, typically, most make between $15 and $40 an hour, Galvin said.

But academic tutoring isn’t the only type of tutoring that is in-demand.

As more Americans are hunkering down at home, especially in states where there shelter-in-place orders are in effect, video games are gaining popularity.

In fact Nintendo Switches NTDOY, -1.86% US:NTDOY US:NTDOY a popular game console, have gone out of stock on sites including Amazon AMZN, -2.80%, Target TGT, -9.47%  and Walmart WMT, -4.89% US:WMT (Nintendo Inc. did not immediately respond to a request for comment).

Spersch, a 27-year-old based in Vancouver, started offering virtual game coaching services two years ago on Fiverr FVRR, -0.33%,  an online market for freelancers.

“After playing Overwatch” — a team-based game in which players who together to defend a fictionalized Earth — “I got pretty decent and I made it to the top 500 ranking,” Spersch, who goes by the name Riverr Blue on gaming platforms, said. He used to offer his teammates tips on how to improve their fighting skills and eventually someone encouraged him to consider charging money for his coaching.

Typically he coaches Fortnite TCEHY, +1.71%  and Overwatch players for 15 to 20 hours a week. But since his full-time job as an after-school animation instructor is in limbo since classes were cancelled, he’s been coaching games almost 40 hours a week, earning between $15 to $35 an hour.

“I keep getting dads or couples — and don’t get me wrong, it’s the most heartwarming thing to see them play — but I really prefer to work with kids ages seven to 13,” he said.

He said he would like to expand his business to teach animation classes geared for children over Zoom ZM, +2.17%

In the last week of December, there were 2,794 job openings within the U.S. for e-commerce jobs on ZipRecruiter, a job posting site. Last week there were nearly six times as many openings in the sector.

“Many stores, especially old-fashioned traditional ones, are really struggling to get any business right now,” Julia Pollak, an economist at ZipRecruiter, said. To open an online shop or list items on sites like Amazon, eBay EBAY, +2.53%  and Etsy ETSY, +8.29%  many small business owners are looking to hire temporary help.

For instance, a liquor store based in San Diego posted a temporary remote job for someone who is proficient in Photoshop ADBE, -1.32%  to help edit photos of their products so that they can sell more online. That job pays $14 an hour.

Pollak said she doesn’t expect these jobs to “last very long,” given that traditional stores are likely to shift back to brick and mortar once shelter-in-place orders are lifted. In the meantime, it is providing many furloughed workers with “a safety net” of income that may “help them get out of this rut sooner.”

PrevPreviousNext Avenue: Gig-worker laws could be bad news for your livelihood
NextBarron's Explains: A Guide to Estate PlanningNext