The Margin: Zoom green screens, but not pants: Here are the new work from home essentials

Who else is realizing that their home office is due for an upgrade?

Millions of Americans have recently shifted to working from home full-time as most states have adopted stay-at-home guidelines to prevent the spread of COVID-19 from getting worse. And they’re the lucky ones, as a record 10 million Americans filed for unemployment during the last two weeks of March as the coronavirus outbreak triggered mass layoffs.

But now that remote workers have spent a few weeks hunched over laptops on kitchen counters, dining tables and couches — and they are facing another month, at the very least, of working remotely — many are investing in products to be more productive while working in what can be an unprofessional (and pretty uncomfortable) setting.

Take Jill Sanfilippo, a corporate paralegal in Montgomery, N.J., who bought a $150 padded stool/bench on Amazon AMZN, +0.26%  so that she has a cushier seat while toggling between two laptops. She also grabbed an external laptop mouse for $20 to ditch the tracking pad.

“I’m working at the kitchen counter while my son is schooling at the dining room table, so it’s a long day of standing!” Sanfilippo, 48, told MarketWatch. “And if this goes much longer, I’m going to get [my son] Charlie an actual desk.” 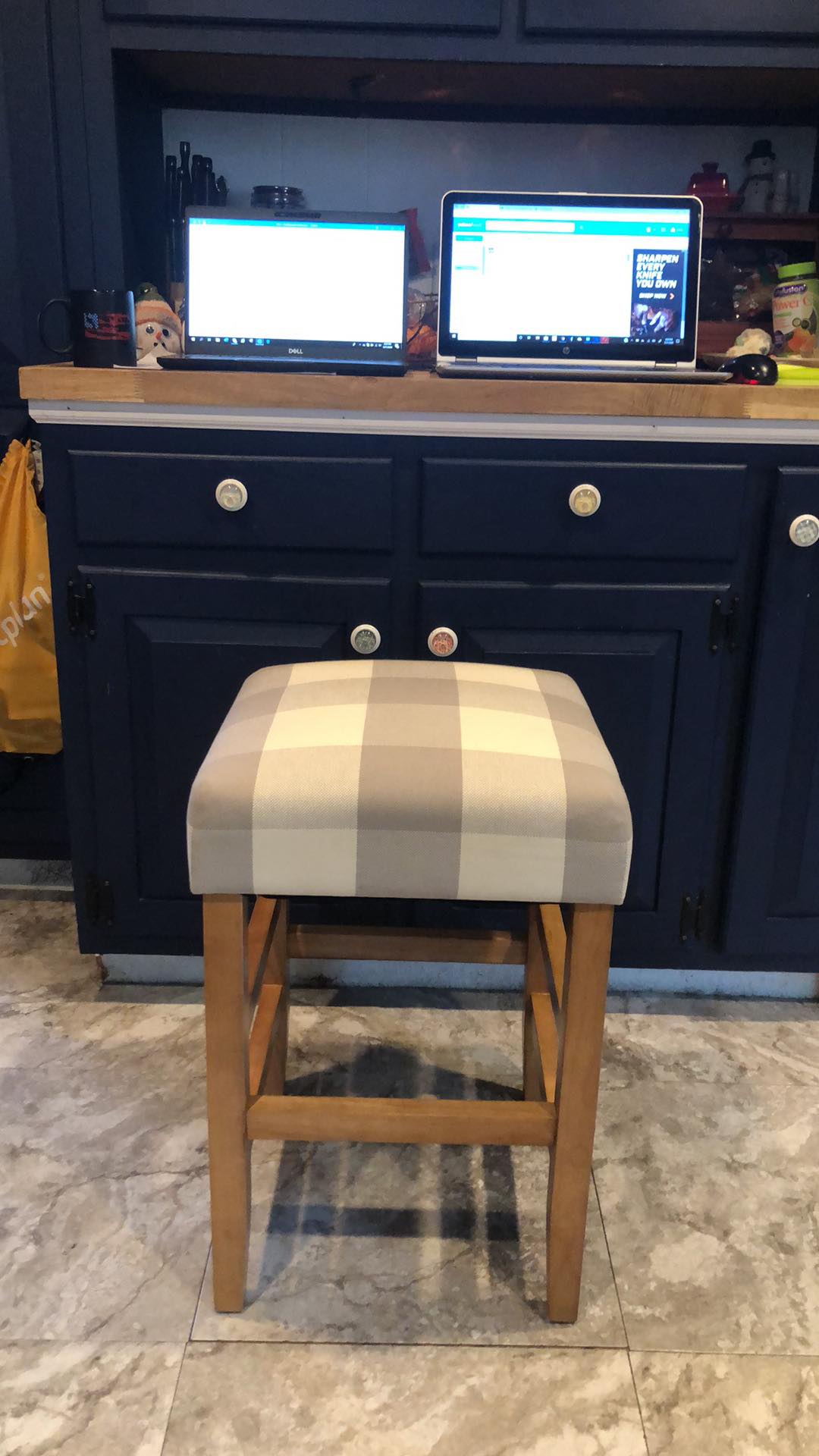 She’s not alone. A Walmart WMT, +0.20%   representative told MarketWatch that more customers have been shopping for desks, folding tables and even TV trays to create more space to work or dine on now that people are spending so much more time at home. IKEA also shared that its $49 simple white MICKE desk and its $239 adjustable SKARSTA sit/stand desk are in high demand.

And some remote workers have been sharing their attempts to create standing desks and workstations at home on Twitter TWTR, +0.21%  — with some comical results.

Macgyver’d a standing desk today out of textbooks and a shoe rack! Will probably be my #wfh setup for the foreseeable future #innovation pic.twitter.com/KDxQbUvbjo

Standing desk, thanks to LaCroix and my vegetarian cookbook. pic.twitter.com/oftFYAFhzh

Office Depot’s ODP, +0.63%  most popular products at the moment include desk chairs, as well as webcams, printers, laptops and display monitors. The office supply chain has even rolled out “work from anywhere” bundles, ranging from a $279.45 “furniture essentials” kit that includes a computer desk, desk chair, dry erase board and desk lamp, and running up to a “professional working bundle” that features a wireless printer and keyboard, LED monitor, USB mini dock and a headset for $758.95. And Best Buy BBY, -0.11%   has seen laptops, monitors and webcams flying off shelves, which are key in letting people do their work (including schoolwork) from home.

Adobe Analytics reported this week that orders for computers, including laptops and desktops, increased 40% between March 11-25, compared with March 1-10. The industry analysts at NPD Group have also seen “historic sales increases” on computers and computer accessories. Notebook PC sales increased almost 30% year-over-year for the past week in February, and then spiked to a more than 50% increase in the first two weeks of March as the coronavirus was declared a global pandemic, and Americans began sheltering in place. Likewise, monitor sales were flat at the beginning of February, NPD said, but saw a 40% increase for the first two weeks of March.

#COVID19 #lockdown caused new interest in some products according to @meetglimpse. Bidets saw a 379% surge as some searched for TP alternatives and the hunt for dumbells jumped 725% as gyms closed. At least people will have doorstops when this is over. https://t.co/12gPiWyiVN pic.twitter.com/7jXGRqBzvF

But there’s also been a run on some unexpected products for conducting business — particularly those related to the surge in videoconference calls as more meetings have been moved online. Zoom ZM, -8.39%  has seen its daily users more than quadruple, while Microsoft’s MSFT, +0.12%   Teams communications suite counted 44 million daily active users on March 19, which was up 12 million from just the week before. Microsoft has also reported more than 40 million daily active Skype users, up 70% from a month ago. [There’s been some recent Zoom backlash, however, stemming from growing security concerns as hackers have started “Zoom Bombing” videoconferences to post pornographic or hate images.]

So Natan Edelsburg, the COO of Muck Rack, dropped $90 (including shipping) on a green screen that attaches to his desk chair, which he can use to drop in digital background images rather than broadcast his one-bedroom Manhattan apartment. His Apple AAPL, +0.15%   MacBook Air doesn’t support Zoom’s virtual backgrounds during video chats, he explained to MarketWatch, so he bought this workaround. Now he doesn’t have to worry about whether his webcam is picking up any clutter or anything behind him — although he looks pretty ridiculous behind the scenes with a giant green bubble around him.

“My wife says I look like ‘The Wizard of Oz,’” he laughed. “It’s definitely brightened up my day a lot.”

Indeed, Zoom virtual backgrounds are taking off. Retailers like the Williams-Sonoma brand WSM, +3.51%  West Elm and the Masco-owned MAS, -0.54%  BEHR paint have created their own backgrounds — everything from patterned wallpaper to a St. Barts beach house or an Italian villa — for people to use during videoconferencing or virtual group hangouts if they’re not satisfied with Zoom’s options. (To drop them in, save the background to your desktop, and then click the “settings” gear while on Zoom, select “virtual background” and hit the “plus sign” to upload the photo you want to set as your backdrop.)

Edelsburg says it’s a conversation starter. “It’s a great way to lighten the mood and the room right now,” he said, admitting that he has projected himself standing in front of a Delorean, like in “Back to the Future,” and even used a virtual backdrop of Muck Rack’s own Soho office, which he says was his employees’ favorite.

Related: Do you miss the office and hate working from home? Give it a chance, you may end up loving it

Jeff Halevy, CEO of the HLVY Group family of fitness brands, also upgraded his workstation to put his best face forward on videoconferences. “I was getting tired of always having an unwelcome close-up courtesy of my MacBook’s native camera,” said Halevy, 41, from Manhattan. “I tried shopping for a better webcam that could zoom out, only to find out that the rest of the world had beaten me to it. Nearly every webcam was sold out. So instead, I improvised and added an Apple Magic Keyboard and Apple Magic Mouse to my setup, so I could position myself farther away from my laptop.”

Related: Should you turn on your video during a Zoom call or take Slack breaks? How to keep your sanity while working from home

And Walmart’s EVP of corporate affairs, Dan Bartlett, recently told Yahoo Finance that the retail chain has noticed that the rise in videoconferencing has led to a pretty amusing sales trend.

“We’re seeing increased sales in tops, but not bottoms. So, people who are concerned, obviously, from the waist up,” he said. “These behaviors are going to continue to change and evolve as people get accustomed to this new lifestyle.”

Target TGT, -0.32% on the other hand, has seen clothing sales drop — well, except for leisure wear and pajamas. Both trends were perfectly embodied by John Krasinski in his new YouTube series “Some Good News” this week: when “The Office” star stood up at the end of his broadcast, viewers saw that he was actually wearing pajama bottoms below his otherwise professional-looking suit jacket, shirt and tie.

This week I asked you all to send me #SomeGoodNews … And look what happened! https://t.co/smtSgIDoye

Related: Misunderstandings can be more common’ — the perils of working from home during the coronavirus pandemic

Dispatches from a Pandemic: Pope Francis takes aim at anti-mask protestors: ‘They are incapable of moving outside of their own little world’

The Moneyist: I gave my daughter $20K to start a company with her husband. They divorced and he got the business. Can I ask for it back?

Outside the Box: Why these 5 U.S. cities will bounce back from COVID-19 faster and stronger

Mark Hulbert: Here are your odds that stock prices will be higher at the end of 2021