The rich are getting richer among high-yield ETFs, too 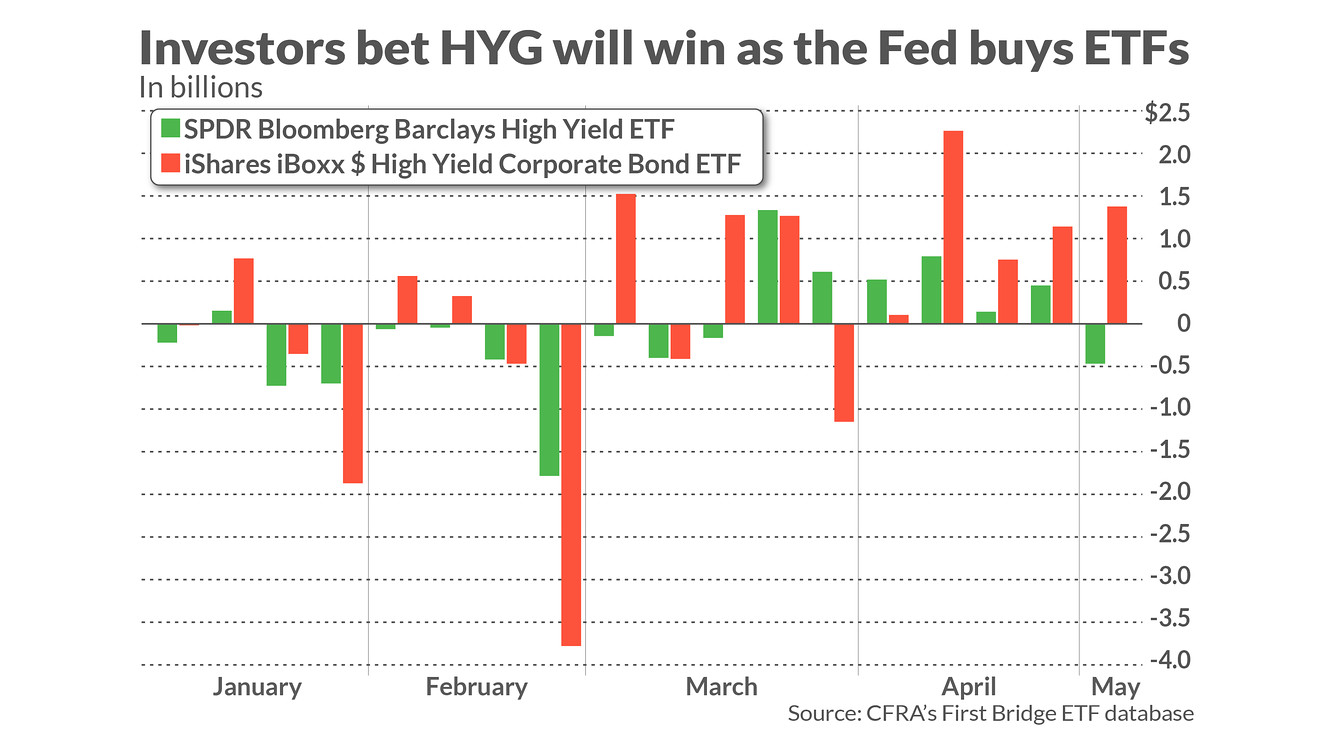 In the weeks since the central bank announced unprecedented levels of asset purchases to bolster financial markets after the market shock from the coronavirus pandemic, there have been some winners — and losers — before the Fed even started buying. That’s amplifying the survival-of-the-fittest trend that already exists in one corner of the marketplace.

Since the March 23 announcement, investors have plowed over $9 billion into the two largest corporate bond exchange-traded funds. About one-third — $3.38 billion — has gone into the SPDR Bloomberg Barclays High Yield Bond ETF JNK, -0.05% , while nearly twice that amount, $5.8 billion, has flowed into the iShares iBoxx $ High Yield Corporate Bond ETF HYG, -0.12% .

As institutional investors increasingly embrace ETFs, using diversified baskets of securities to express opinions on sectors, asset classes, or other broad views, they’re looking to the biggest, most liquid funds to do so, noted Todd Rosenbluth, head of mutual fund and ETF research at CFRA.

“As the pie gets bigger, the benefits accrue to the bigger players,” Rosenbluth said.

But in the case of the HYG and JNK ETFs, Rosenbluth said, it’s “ironic” that JNK has been left in the dust. “It’s as if investors thought the Fed won’t buy anything but HYG,” he said. “In fact, they’re quite likely to buy both.”

Perhaps the biggest and most important reason for that view is the elephant in the room: BlackRock, the massive asset manager which is iShares’ parent company, is running the Fed’s bond-buying program. The company late in March pledged to “treat BlackRock-sponsored ETFs on the same neutral footing as third-party ETFs.”

While many market participants have said publicly that BlackRock’s participation creates at least a perception of a conflict of interest, “it’s unlikely they’re going to buy just their own ETFs,” Rosenbluth said.

Both HYG and JNK have very similar allocations to different sectors, as shown in the table below, and to segments of the credit rating scale.

Mostly, though, just as in other corners of the market, the fund’s popularity seems another example of how ETFs are increasingly split into haves and have-nots.

“iShares has a broader suite of fixed income ETFs, so they reap the benefit of the demand” for products like the iShares iBoxx $ Investment Grade Corporate Bond ETF LQD, +0.96% , and the iShares Core U.S. Aggregate Bond ETF AGG, +0.25%, Rosenbluth said. “Institutional players are choosing to focus on one family.”

See:ETF survival of the fittest shows just what’s going on in financial markets

PrevPreviousSocial Security recipients may be in for a rude awakening later this year
NextPersonal Finance Daily: ‘I owe child support from my first marriage and did not receive a stimulus check’ and what one-third of Americans are planning to do this summerNext