Their Stories: Born without toes on his right foot, kicker Tom Dempsey cemented a legacy in the NFL 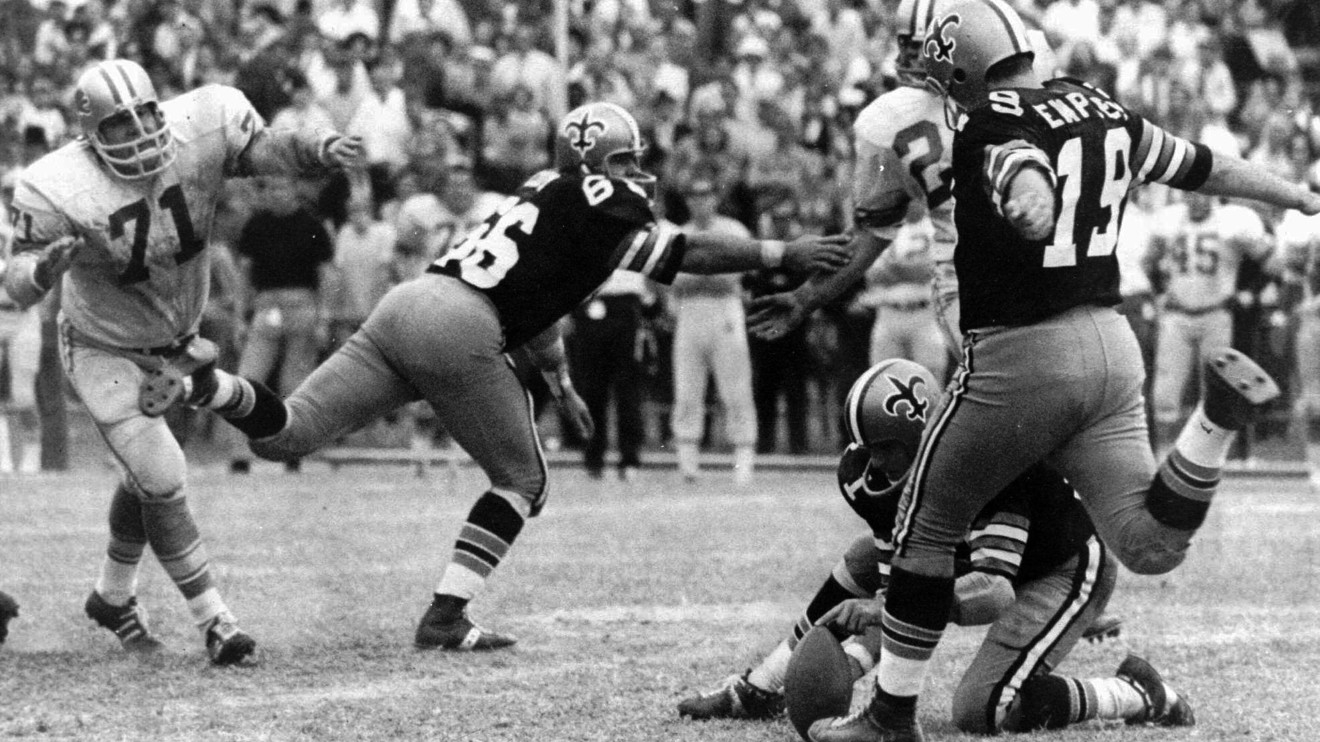 The National Football League has seen its fair share of extraordinary individual acts. But Tom Dempsey stood out.

His name was seared into the minds of generations of football lovers in 1970 due to his own personal triumph, when he kicked a 63-yard-field goal to set a new NFL record. Not only did Dempsey give fans of the struggling New Orleans Saints something to boast about, he captured the imagination of the nation due to the fact that he was born without toes on the right foot that he used to propel the record-setting kick.

“Stumpy,” as he was called by many of his teammates, enjoyed a long career, spending 11 seasons in the NFL, during which he kicked 159 field goals.

“Tom’s life spoke directly to the power of the human spirit and exemplified his resolute determination to not allow setbacks to impede following his dreams and aspirations,” said Saints’ owner Gayle Benson in a statement. “He exemplified the same fight and fortitude in recent years as he battled valiantly against illnesses but never wavered and kept his trademark sense of humor. He holds a special place in the hearts and minds of the Saints family.”

Dempsey died on April 4 at the age of 73 due to complications from the coronavirus, which he contracted during an outbreak at New Orleans’ Lambeth House retirement home, where he resided in assisted living with Alzheimer’s disease and dementia. Dempsey was diagnosed with COVID-19 on March 25, according to his daughter, Ashley Dempsey. He was one of at least 18 residents to die after contracting the virus, making Lambeth House the first and deadliest coronavirus cluster in the state of Louisiana.

Dempsey’s death shook his adopted hometown’s fiercely loyal Saints fans at a time when they were reeling at COVID-19’s impact on their beloved team. Current head coach Sean Payton tested positive earlier in March (and has since recovered), while Bobby Hebert Sr., the father of former Saints quarterback Bobby Hebert, died on March 28 at the age of 81 after testing positive.

Thomas John Dempsey was born on Jan. 12, 1947, in Milwaukee, and grew up near San Diego. His father, Huey, was a mechanic for a public utility company, and his mother, LaVerne (Sorce) Dempsey, ran a jewelry store in Encinitas, where Dempsey attended high school and was a defensive lineman and kicker on the football team. After graduating, he played nearby at Palomar College before a clash with a coach ended his time with the team. Dempsey went to Massachusetts to play in a semiprofessional league, and after multiple failed NFL tryouts, signed with the Saints as an undrafted player.

Upon making it as a pro, Dempsey captured the imagination of onlookers due to his being born without fingers on his right hand or toes on his right foot. His custom-made right shoe, with a flattened and enlarged toe surface, is displayed in an exhibit chronicling the first century of professional football at the Pro Football Hall of Fame in Canton, Ohio. (The exact shoe he was wearing for his record-setting kick belongs to the Saints’ Hall of Fame.)

As the ultimate underdog, Dempsey became a fan favorite during his short tenure with the club (1969-70). He enjoyed immediate success in 1969 as a rookie, having connected on 22 field goals in 41 attempts, and was voted to the Pro Bowl.

But nothing could prepare fans for what happened at Tulane Stadium on Nov. 8, 1970, when his thunderous kick on the last play of the game not only resulted in the Saints beating the Detroit Lions 19-17, but also set a record that would stand for more than four decades. Dempsey later recalled the Lions’ defenders laughing at what they believed to be an impossible attempt from the Saints’ own 37-yard-line. (Prior to 1974, the NFL goal posts were placed on the goal lines instead of the end lines, where they sit today.)

Dempsey arrived in the league as something of an anomaly. At 6-foot-2, 255 pounds, the imposing Dempsey was larger than most kickers, with a strong leg at a time when long-distance kicking was not a key facet of the sport, as it is today.

Dempsey’s direct, straight-on approach to kicking stood out at a time when the soccer-style technique was becoming the standard across the league. Some opposing players and coaches said Dempsey’s special shoe gave him an unfair advantage, to which he later told reporters: “Unfair, eh? How about you try kicking a 63-yard field goal to win it with two seconds left and you’re wearing a square shoe, oh yeah, and no toes either.”

After retiring from football, Dempsey returned to New Orleans, where he remained a popular figure. He was inducted into the Saints’ Hall of Fame in 1989. He raised a family with his wife, Carlene, worked as a salesman in the oil industry until the late 1980s, and ran a car dealership owned by the Saints’ owner, Tom Benson.

Dempsey’s home in the suburb of Metairie was severely damaged in 2005 during Hurricane Katrina. The first floor was flooded, with memorabilia from Dempsey’s playing days washed away. As word spread of the loss, fans mailed him items to replace the ones that had been destroyed. “It was really nice,” Dempsey told the New York Times in a 2010 interview. “It really made me feel good…The hurricane flooded me out of a lot of memorabilia, but it can’t flood out the memories.”

See: Their Stories — A series about lives lost during the COVID-19 pandemic

In 2012, Dempsey publicly disclosed that he had been diagnosed with Alzheimer’s disease and dementia, and detailed the treatment he was receiving. He spent the final years of his life at Lambeth House.

Dempsey is survived by his wife, Carlene; their children Ashley, Toby, and Meghan; three grandchildren; and his sister, Janice Dempsey.

PrevPreviousCityWatch: New York schools will be closed through the academic year
NextDispatches from a Pandemic: What should you do if NO ONE wears a face mask at work? My son is back on the job, but the executives work from homeNext