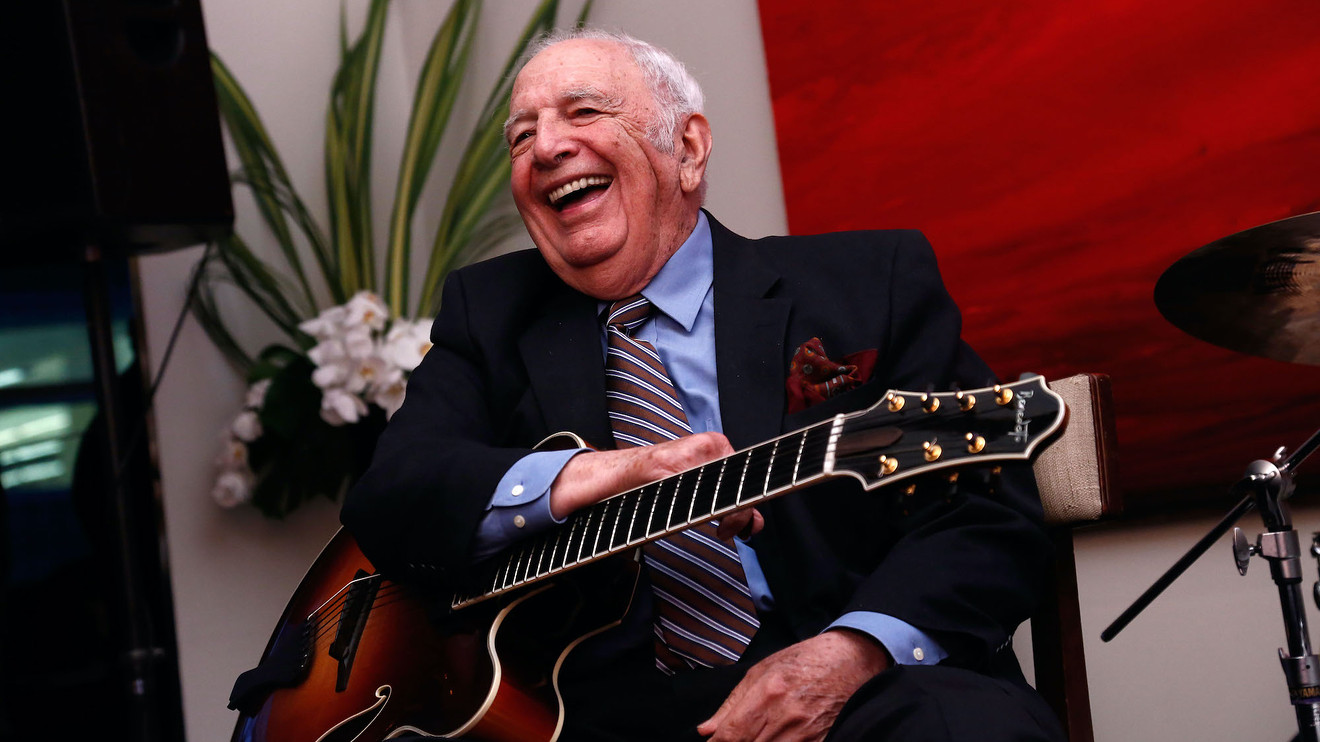 Bucky Pizzarelli was a true master of his craft, having spent three-quarters of a century perfecting his technique. After spending years as a respected but mostly anonymous supporting player and session guitarist, he started to step into the spotlight in the late 1960s, became a mainstay of the New York jazz scene in the 1970s, and went on to perform and record with some of the most iconic singers in jazz and popular music. Pizzarelli’s unparalleled technical prowess, rhythmic footing, and harmonic understanding remained on display as he performed into his 90s, despite multiple hospitalizations caused by a stroke and pneumonia.

“It’s amazing what rooms Bucky Pizzarelli ended up in,” wrote John Pizzarelli, Bucky Pizzarelli’s oldest son and regular musical partner, on Facebook. “My father was a mentor to so many guitarists, both professional and amateur. Always doling out advice, always encouraging, always in tune, and always ready for a record date.”

Pizzarelli died at the age of 94 on April 1 in Saddle River, N.J. John Pizzarelli said the cause was the coronavirus, and later revealed that his mother, Ruth, died exactly a week later; her cause of death remains unknown. (“I am certain Bucky called for her,” said John Pizzarelli on Facebook. FB, -1.35%

John Paul Pizzarelli was born on Jan. 9, 1926, in Paterson, N.J., where his parents, John and Amelia (DiDomenico) Pizzarelli, owned a grocery store. Two uncles, Pete and Bobby Domenick, played mandolin and banjo and taught young John some musical basics from the age of nine. His nickname was bestowed by his father, who as a teenager became obsessed with the Wild West and worked as a ranch hand in West Texas. After returning to New Jersey, he nicknamed his young son “buckskin,” which was later shortened to Bucky.

In his teens, Pizzarelli often sat in with a local pianist and accordionist named Joe Mooney, and began his first professional career in 1943, when he joined a big band led by the popular singer Vaughn Monroe. The following year, he turned 18, was drafted into the Army, and served in the 86th Infantry Division in Germany during the final months of World War II. After two years of military service, Pizzarelli returned to New Jersey and rejoined Monroe’s outfit, touring the country until the band broke up in 1953.

Pizzarelli spent the 1950s and ’60s establishing himself as a sought-after sideman. His playing could be heard on hundreds of records across various genres, including some of the period’s most famous recordings such as Ray Charles’ “Georgia On My Mind,” Ben E. King’s “Stand By Me,” and Brian Hyland’s “Itsy Bitsy Teenie Weenie Yellow Polka Dot Bikini.” Though he was often uncredited, Pizzarelli developed a reputation as a master of the rhythm guitar as well as a gifted soloist.

Pizzarelli saw his stature grow due to numerous high-profile television gigs, beginning in the 1950s as a staff musician at NBC, where he played in “The Tonight Show” ensemble under Skitch Henderson, and later Doc Severinsen. In the 1970s, he served in Bobby Rosengarden’s band for ABC’s “The Dick Cavett Show” and contributed to the network’s short-lived “Saturday Night Live with Howard Cosell.”

Pizzarelli also enjoyed a successful association with Benny Goodman, which began in 1966 and included European tours. It lasted until Goodman’s death in 1986.

The 1970s saw Pizzarelli performing more frequently in New York nightclubs in order to stay close to his four school-age children and their New Jersey home. He played solo, led small groups, and sat in as a sideman with popular jazz players including the saxophonists Zoot Sims and Bud Freeman and the violinists Stéphane Grappelli and Joe Venuti.

In 1980, Pizzarelli began a fruitful partnership with his son John, who was only 20 years old at the time. Father and son proceeded to perform and record together, often joined by John’s younger brother, Martin, on bass, and John’s wife, Jessica Molaskey, on vocals. As John Pizzarelli’s fame grew, he frequently employed his father as a sideman.

During his career, Pizzarelli played with legends such as Buddy Rich, Miles Davis, Dizzy Gillespie, Nat King Cole, Paul McCartney, Frank Sinatra, and more. He performed at the White House for President Ronald Reagan twice, the first time in 1982 as part of the Benny Goodman Quartet, and for Bill Clinton in 1998.

Pizzarelli was among the few popular guitarists to play an instrument with seven strings rather than the standard six. In the late 1960s, Pizzarelli found himself captivated by the guitarist George Van Eps, who actively promoted his use of a seven-string guitar featuring an additional bass string. (“I always wanted to do solo guitar playing,” Pizzarelli told NPR in 2009, “and when we heard George play…he was knocking everybody out.”)

Pizzarelli tuned the extra string to a low A, which enabled him to provide a bass line when playing unaccompanied or in a duo. His signature Benedetto archtop guitar is on display at the National Museum of American History.

Read more stories of the lives lost to COVID-19:

Renowned for his devotion to his family, Pizzarelli resisted uprooting his family for career opportunities in New York City or Hollywood, instead choosing to raise his children in his native New Jersey.

“He was a wonderful dad,” recalled John Pizzarelli in his tribute. “But he was music first and foremost and it showed in his artistry.”