Coronavirus is officially a pandemic, the World Health Organization said Wednesday — and job experts say that news may spell trouble for some U.S. workers more than others.

The U.S. retail sector will be hit by both demand and supply-chain issues if the situation continues to worsen, according to analysts from Cowen, an independent investment bank and financial-services company. “Declining consumer confidence, potentially severe retail-traffic declines, and temporary store closures are evolving risk factors that depend on uncertain variables like the geographic spread of the virus and the timing of containment/eradication solutions,” they wrote in a note this month.

Consumer-facing companies will be the first hit if novel coronavirus spreads across the U.S., but as the government continues to raise awareness about the virus and promote the best ways to guard against it, some employers may be reluctant to let their staff go just yet. One reason: It’s expensive to retrain and rehire. With unemployment at a 50-year low, the underlying economy remains relatively strong, economists say.

As the government continues to raise awareness about the virus, some employers may be reluctant to let their staff go, just yet. One reason: It’s expensive to retrain and rehire.

The manufacturing and construction industries will be more likely to hold off on making any big decisions on layoffs, said Rubeela Farooqi, chief U.S. economist at High Frequency Economics, a New York-based economic research company. But the same may not carry over for people working in the food, hospitality and transportation sector, she said.

“In construction and manufacturing you can’t just hire someone with no experience,” she said, “especially if they expect a rebound.” Employers “will be hesitant to layoff workers” to cut costs Farooqi said. They will, instead, be betting on people taking preventative measures in an effort to stop the spread of COVID-19, the disease caused by coronavirus SARS-CoV-2.

More about the latest jobs report: U.S. economy adds strong 273,000 jobs in February, but coronavirus looms as threat to hiring

Supply chain disruptions due to the coronavirus are likely to increase the cost of business for manufacturing and construction companies, said Elise Gould an economist from the Economic Policy Institute, a progressive think-tank based in Washington, D.C. Companies like Hasbro Inc. HAS, -6.08%  and Apple AAPL, -3.17%  may have to spend more money on inputs that they would otherwise import from countries like China.

Hasbro has previously said that China is responsible for about two-thirds of its global sourcing. (Hasbro and Apple did not immediately respond to requests for comment).

In the manufacturing industry, many employers are actually struggling to fill openings because the positions have become more technically sophisticated than they were in past decades.

In the manufacturing industry, many employers are actually struggling to fill openings because the positions have become more technically sophisticated than they were in past decades, according to an April 2019 report published by the National Association of Manufacturers, a trade organization based in Washington, D.C. with 14,000 member companies.

Earlier this week NAM released a set of COVID-19 policy-action recommendations. The association called on “banking regulators, such as the Federal Reserve and the Office of the Comptroller of the Currency, to support leniency from financial institutions regarding the credit conditions of small and medium-sized businesses facing short-term challenges, including offering extended grace periods and short-term loans.”

To help stimulate long-term job growth in the U.S., NAM called upon lawmakers to reduce tariffs on U.S. exports.

(NAM did not respond to MarketWatch’s request for comment regarding manufacturing job layoffs.)

The skills that are necessary for many manufacturing jobs include systems engineering, project management as well as software development, according to Burning Glass Technologies, a software company that compiles data on current labor-market trends. But if the epidemic worsens, smaller manufacturing and construction companies may have to layoff workers, especially if they are unable to ship goods out, said Mark Zandi, chief economist at Moody’s MCO, -6.69%.

(Associated Builders and Contractors, a D.C.-based trade organization representing 21,000 industry members, did not immediately respond to a request for comment.)

Health-care workers will likely experience an increase in demand for workers. Before COVID-19, there was already a shortage, of over 1 million health care jobs, according to Burning Glass Technologies, a real-time job-market analytics software company based in Boston, Mass. In parts of Italy, retired doctors are being asked to go back to work. In the U.S. there are 16.5 million health-care workers. By 2028, the BLS projects an increase of 8.4 million jobs in the field. “Health-care jobs for the past 10 to 20 years has been recession-proof,” Gould said. 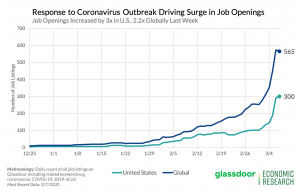 Careers site Glassdoor released data Wednesday highlighting jobs that have seen increased demand since the COVID-19 outbreak. “The surge in virus-related jobs is correlated to the areas where the outbreak is most prominent,” the company said. “Five states account for 61% of virus-related job openings. Some 32% of new jobs are posted by the government, health care, biotechnology and pharmaceuticals, and nonprofit industries. Another third (34%) are published by firms that hire in demand contract positions.

A mix of legacy drugmakers and small startups have stepped forward with plans to develop vaccines or treatments that target the infection caused by the novel coronavirus. At least major pharmaceutical companies are currently working on this, but it’s not yet known how long it will take to complete testing successfully. It could be years away and, in the meantime, it will be up to the health-care service to deal with patients, if the current rate of contagion persists.

Job security in the food and hospitality industry

Many restaurants are also likely to be hit by a drop in patrons as more consumers are stocking up on groceries and having food delivered. In 2005, when the avian-flu pandemic occurred, the Congressional Budget Office estimated that spending on food services, arts and accommodations would temporarily decline by about 80% during a major pandemic.

“America’s restaurant and food-service industry is home to 15.6 million trained and skilled employees, and the industry is a key economic driver in communities,” said Mollie O’Dell, a spokeswoman for the National Restaurant Association, a Washington D.C.-based industry organization. “We are carefully monitoring the impact that COVID-19 will have on our workforce.”

If people continue to delay travel plans, service-industry workers could be laid off. Experts advise people to only travel if necessary in order to lower their risk of catching the virus, and spreading it.

Some 1.3 million people work in food and beverage stores, according to the latest government report. “Hourly workers are the first to go,” said Arran Stewart, co-founder of Job.com, an automated job-matching site used by recruiters and job applicants. Stewart advises people in this sector to hang tight, for now. “If anything, I would be trying to work as hard and as well as possible to be the employee they don’t get rid of.”

“If you categorically can see a shift at your company you — of course — need to be looking for another role,” he said.

Americans are also increasingly canceling or postponing travel plans as the virus spreads more widely across the country. Worldwide, there were 121,564 COVID-19 cases and 4,373 deaths as of Wednesday, according to data published by the Johns Hopkins Whiting School of Engineering’s Center for Systems Science and Engineering; 66,239 people have recovered. In the U.S., 31 people have died, and there are approximately 1,050 confirmed cases.

See also: Should I cancel my flight? Will recirculated air on a plane spread coronavirus? Here’s what you need to know before traveling

If people continue to delay travel plans, cancel flights and hotel rooms, service-industry workers may be laid off, Zandi added. Health professionals advise people to only travel if necessary to lower their risk of catching the virus, but also to prevent the risk of spreading it. The virus has a median incubation rate of 5.1 days, a recent report found, which means people could travel without showing any symptoms at all.

But some within the travel industry say there’s little reason to cancel all travel plans. “The facts are that health experts and the Centers for Disease Control and Prevention have continually repeated that the coronavirus risk domestically remains low with no restrictions on travel in the U.S.,” said Chip Rogers, president and CEO of the American Hotel & Lodging Association, an industry trade group based in Washington, D.C.

“If companies continue to cancel travel and meetings because of fear not fact, there could very well be a significant, negative impact on the economy, of which the hotel industry is a key driver of growth,” he said. “I am scheduled to be in more than a dozen different U.S. cities over the next six weeks. I have assessed the low risk of COVID-19 and I plan to make every one of those trips.”

PrevPreviousCanceled markets, restaurant curfews and no double-kissing — what Italy is like for this American retiree living abroad
NextDeep Dive: These U.S. stocks fell the most after the coronavirus was upgraded to a pandemicNext